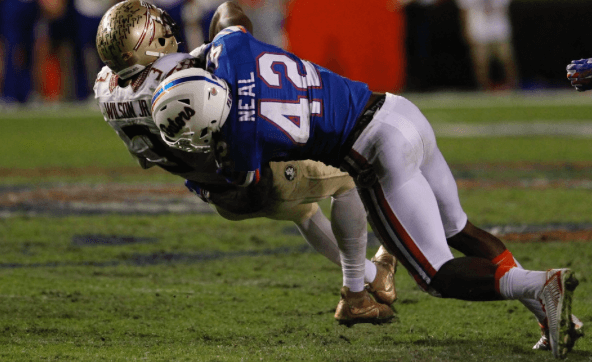 Another member of DBU is off the board.

The Atlanta Falcons have selected safety Keanu Neal with the 17th pick in the NFL Draft, joining fellow Gator defensive back Vernon Hargreaves as a first round pick. Neal now owns the distinction of being the 50th Gator to ever be drafted in the first round, and the 15th since 2007.

The short way to describe Neal is “aggressive”. Neal is a hard hitting ball hawk with good range and more than average intelligence, recognizing plays before they happen. The fact that he hits hard enough to be a linebacker had to be very appealing to the Falcons, and he’s a great run stopper to boot. I initially wasn’t certain about his decision to leave after his junior year, but a terrific combine vaulted him into the first round. And so his ‘huge upside’ label gave way to a ‘more polished, NFL ready’ safety. So yes, he could very well be a week one starter.

Anyway, good for Neal. There may still be one more Gator taken in Jonathan Bullard, so don’t go to sleep yet…