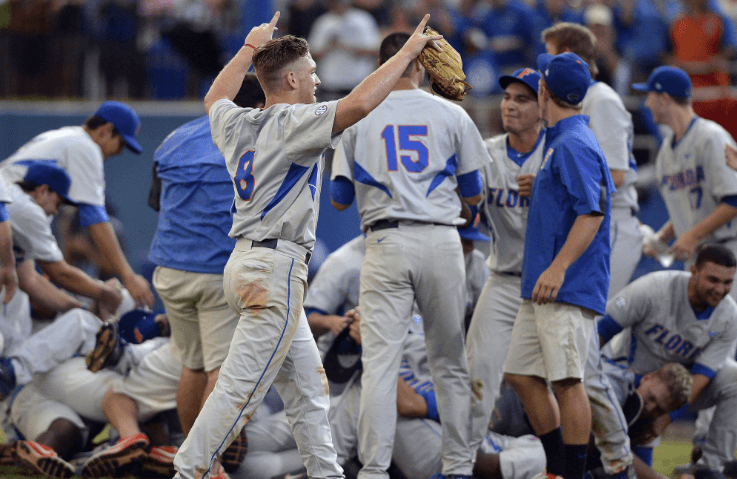 In the wake of adversity, Florida’s baseball team re-proved an old adage: beating FSU can solve any problem. And with tonight’s 3-2 victory over the eighth ranked Seminoles, the Gators are right back where they were always destined to be.

The Gators had a rather rough weekend up in Lexington. After clobbering Kentucky 12-5 in the first game, they lost the second game to set up a rubber match. OK, no big deal, teams lose games. But Florida wound up losing that game… and thus, the series… to Kentucky… on a wild pitch. In the tenth inning. After the Gators had originally taken the lead in the top of the tenth.

That loss caused Florida to drop from its spot atop the national rankings. It caused questions to be asked about whether this team, tabbed by some as the best in the program’s history, was indeed invincible, and whether or not it had peaked too soon. And the two game losing streak suddenly magnified the importance of this midweek game against the Noles, with newly top-ranked Texas A&M looming next weekend.

Florida won this game by getting just enough offense early on, and then holding on for dear life. Mike Rivera’s two run homer in the second and Buddy Reed’s RBI triple in the third would be all the Gators would do offensively, as the game then segued into a pitcher’s battle. Florida took a 3-1 lead on Reed’s triple, and the score stayed that way until Quincy Neiporte drove in John Sansone in the 8th to cut the lead to 3-2; FSU would fail to score again, and so the Gators won, 3-2. In doing so, Florida has now beaten FSU in three straight season series, and nine out of the last eleven games.

But that paragraph long recap doesn’t do justice to the job Florida’s pitching staff did tonight, combining to allow just seven hits on the day. Freshman Jackson Kowar got the start, and after giving up an early homer to FSU’s Cal Raleigh, settled down and flustered the Noles for the next four innings with his control. Fellow freshman Brady Singer took over in the sixth, and the only run he gave up came on an RBI single to drive in a runner who had reached via an error. Shaun Anderson came in to finish the job, and sent the Noles down in order to secure the win.

So now Florida’s got the season series wrapped up against their arch rivals, not to mention a surefire NCAA Tournament team. The goal is to be among the nation’s top eight teams to ensure that every postseason game up until the College World Series is played in McKethan Stadium. And whatever doubts that may have crept up about Florida ensuring that this happens after the Kentucky series are gone (at least for now) with “we won the series against the 8th ranked team in the country” as the latest feather in this team’s cap.

Of course, the stage only gets bigger from here, not smaller. A #1 vs. #2 showdown this weekend in Gainesville featuring Texas A&M gives the Gators the perfect opportunity to just keep impressing. But while it’s usually not a good idea to look back for too long, what this team just did is worth a brief reflection. Losing to Kentucky could have been the start of a rough patch for Florida, but they got it together and beat their rival- who just so happens to be very good.

So this is more than just winning nine out of the last eleven over FSU. This is proving that they’re able to bounce back when dealt a devastating loss. And given that the NCAA Tournament allows for you to lose and still win the national championship, that’s all you can really ask for.

One thought on “Baseball bounceback: Gators claim series over FSU with 3-2 win”