You give Murray State (a midmajor with an unimpressive resume aside from the 30-1 record) a 6, Florida State (who we beat by ~20 with almost identical records) a 3, and you give Florida a 7?

Maybe this is compensation to the Gatorhater nation for seeding UF as the #2 team in the South a year ago.

I thought the NCAA Selection Committee wasn’t supposed to work that way….

But whatever, it did, and the Gators need to deal with it.

In fact, the sooner Gator Nation accepts this seemingly unfair fate, the sooner we can realize just how lucky we are.

We didn’t draw a single dominant team in our region, just a bunch of average, run of the mill teams and a couple of good but not great teams. Florida falls under that good but not great label, which means they have as much of a shot at the Final Four as anybody in the West region. 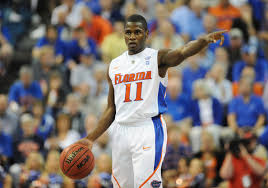 A number 1 seed is supposed to be an aura of invincibility, royalty and dominance. A number 2 seed conveys the message of “we’re the only ones that have a shot at taking down #1. So get out of the way and let us have our shot.” In other words, equal condescendance over early round opponents. Number 3 represents the just-below kingship status, and number 4 represents a dark horse Final Four candidate.

That’s how the Committee wants it to look.

The #1 seed in the West (Michigan State) was up for grabs the entire last few weeks. The Spartans beat Ohio State- the same Buckeyes the Gators played tough til the very end on the Bucks’ home floor- for the Big 10 title and that final #1 seed. But Sparty’s 27-7 record, including embarrassing losses to Northwestern and Illinois, raises some questions about just how dominant they really are, especially when fellow #1 seeds Syracuse (East) and Kentucky (South) are a combined 63-4. Even the third #1 seed, North Carolina, was 29-5, including a blowout win on a jet carrier ship over… Michigan State. The Spartans don’t particularly impress as the #1.

Missouri, the Gators’s future SEC East (for football, anyway) rival, is the #2. They appear slightly more impressive than MSU. At least they won their conference. They are 30-4, but their schedule- and three of their losses- were humiliating. A sweep at the hands of Kansas State paired with an inexplicable loss to Oklahoma State makes their upset chances real. They’re certainly beatable- and the Gators wouldn’t have to wait long to find out. All they have to do is beat UVA, and barring a first round shocker at the hands of Norfolk State, the Gators and the third set of Tigers in the SEC will square off.

Marquette is the 3 seed, and they would be a problem for the Gators on a good day. The only thing wrong with that from their perspective is that a good day against the Gators has to mean that Florida is having a bad day from beyond the arc. For Florida, it’s great. Marquette is a great team, no doubt- but they’ve been beaten up all year with an admittedly grueling Big East schedule. Big East teams generally don’t do well in the Big Dance- they couldn’t put a single team in the finals for 7 years before last year.

The team that frightens me the most is the 4 seed, Louisville, but the Gators wouldn’t face them until the Elite 8. Like Marquette, they are a Big East team, but unlike Marquette, they are on a hot streak, coming off a conference tournament title. They clearly are not feeling the effects of fatigue that the rest of the league is. They also play like the Gators- relying heavily on the three- which means whoever does what they’re comfortable with better will win. That could be a problem.

But forget that for now. It’s all irrelevant right now because if Florida loses to Virginia they won’t be playing any of these teams.

Virginia is another good, but not great team that sort of slipped off as the season progressed. It’s just so hard to say what will happen against them because the Gators don’t really have a backup plan in place if their threes don’t fall. Patric Young will not be able to take on the whole UVA team.

There’s no in depth analysis needed here. No detailed projections, keys or secrets. It’s all quite simple. Does Florida make their threes at a clip of at least 1/3, and do they rebound at least half of their misses?

If yes, then bring it, Mizzou. Walker, Boynton, Murphy and Beal have a surprise in store for Pressey and co.

If not, then there’s always next year…