Uncategorized Despite Struggles, Florida Can Be Dangerous Come March Madness

First, I’d like to apologize for being gone so long.

Second, I’d like to say that I think- and hope- this time I’m back for good.

Third, I’d like to express my utter disgust for the Gator basketball team.

Fourth, I’d like to say that they have as much of a chance of winning the national championship as anybody.

That’s right. The 9 loss Gators are as erratic as anybody in the country, yet due to the current system, they still have a shot at the crystal basketball.

The NCAA tournament allows 68 teams in the field. 25 of those go to conference tournament champions (or in the case of the Ivy League, the regular season champion), leaving 43 at large bids. Personally, I believe it’s disgraceful to give South Dakota State the same mathematical chance of winning it all as Kentucky (unless they’re one of the last 4 in and have to play that extra play in game… but still), but that’s not the point.

Barring a trip to conference tournament championship (which is quite unlikely since the Gators would probably face Kentucky in the semifinals), the Gators will enter the Big Dance on a Big Cold Streak. Yes, even colder than the handshake between Meyer and Richt following the 2008 Cocktail Party. Losses to Georgia, Vandy and probably Kentucky twice in the last 5 games is not what Billy Donovan wants to see heading into a bad draw in the Dance.

Yet thanks to the NCAA’s idea to give each conference champion and some average big conference teams a bid, Florida will probably face one of them unless they really tank and lose to Alabama/South Carolina. The Gators appear to be a low 4 seed or a high 5 seed right now, meaning they’ll face either the best mid-major champion or the worst power conference team in the tournament. That’s great news for Florida, since very few of those teams actually have the speed and athleticism to play defense. Heart, guts and pride, yes, but not the physical ability to blanket Erving Walker and Kenny Boynton beyond the arc… which leads me to my next point.

The SEC tournament doesn’t mean anything for Florida. They could lose by 50 to Kentucky and it won’t do anything. It might lower the seed, but that doesn’t matter in the grand scheme of things.

The way the Gators play, either they make their threes or they don’t. When they do, they can beat FSU, Alabama, Vanderbilt and Mississippi State- all NCAA tournament bound teams- and can hang with Syracuse, Ohio State and Kentucky. When they don’t, they lose to Rutgers, Georgia and Tennessee- all teams that are currently out of the 68 team field.

It’s really that simple. Even if Patric Young is having a great game, the Gators will still lose if they don’t hit their threes. He eclipsed 20 points against Kentucky, and the Gators trailed 46-44 midway in the second half. Then the Gators started missing, and Kentucky opened up the floodgates.

I don’t really like this style of basketball. I like to mix it up and get the big guys the ball inside sometimes. Patric Young is fully capable of scoring 40 points a game if he was the featured part of the offense and 30 if he was as much of a contributor as the three point shooters. It cost the Gators a trip to the Final 4 last year, and if the Gators go cold like they did against Rutgers or Georgia then they can expect an early upset.

However, this is the style of play the Gators have now, and when it works, it is very frightening to play against. I can easily see the Gators make a Final 4 run, but of course, in the NCAA tournament, it’s one game at a time. So it’s going to start with that gritty but woefully inadequate defensively 12-13 seed.

Predicting when the Gators will make their threes is as perilous a way to make a living as exists in North America. I really feel bad for Vegas bookies who have to set lines for this game. However, one way you can have some confidence about their three shooting is if you know they have confidence. A good night shooting threes plus win in your back pocket just a couple of days ago would be a good sign for the round of 32- at least going into the game. 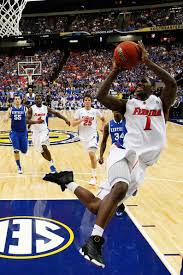 Remember, the prototypical first round 12 seed opponent gets to the Dance on hustle, pride, and determination- not athleticism and talent. That makes Florida a horrendous nightmare of a matchup for them- because they can’t get in front of the three point shooters to contest and alter the shot. Even if they somehow do get in front of Walker or Boynton, they have the speed to flash past them and either get a bunny layup or kick it out to another (and now wide open) three point shooter.

The main way upsets happen in the Dance is if the underdog forces the favorite to play the type of game that suits the underdog, hang close and win the close game. The only other way (more likely for a team like Florida) is if a team literally misses all their open shots. So if Walker, Boynton, Beal and Murphy combine to go 2 for 30 from three point land, then yes, the Gators could lose to Seton Hall or Western Kentucky.

But let’s say that horrible above scenario doesn’t happen. The Gators get a lot of open threes and make a solid percentage of them- say a third. Patric Young can grunt out 15 points and keep the opponent honest. Now the Gators have a winning streak, and more confidence. You would have to take that result as a Gator fan heading into the second round. That’s really all Gator fans can ask for.

Once the Gators are on a roll, they’re hard to stop. They’ve had multiple long winning streaks this year, and against a good team here and there.

It would be nice if they won the SEC tournament. But I would be happy if they just played well and limited the turnovers, got the majorty of rebounds… and see them taking and making threes with confidence.

Which they’ve done against some of the best teams in the nation.

One more thing I want to touch on- there’s no home court advantage in the Dance. Sure, the sites might be closer to some teams than others, but the floor won’t be painted one team’s colors with a huge logo on midcourt. Each school gets an equal number of tickets to start with, and while some might be sold to other team’s fans, the most uneven the fans could ever really be is 70-30, and only for first/second round games for the top two seeds. The only court that matters is neutral and heading into the SEC tournament, the Gators are 1-0 on neutral courts.

Oh, and by the way, seven of Florida’s nine losses were away games.

Level up the site, pack your bags, we’re going to the Sweet 16.

And if we can hit our threes there, regardless of who we play, maybe a little further.

One thought on “Despite Struggles, Florida Can Be Dangerous Come March Madness”