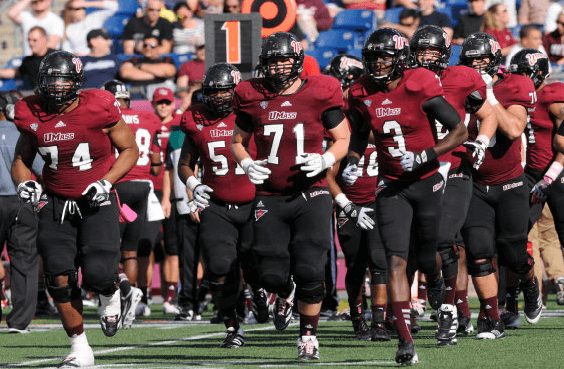 With the season four months away, I figured now is as good a time as any to begin rolling out my annual game by game projections. The thirst for football never dies in some people, so without further ado, let’s get to it.

As you’ll notice, there are a few new features to these game by game previews. Namely, the chart you see below. Most of it is self explanatory; however, there’s one feature that is worth elaborating on. In the second row of the returning starters column, I’ve listed the percentage of returning statistical production, as that feels like a more genuine way to gauge how much a team returns or loses from the previous year. This takes into account the following statistics: passing yards, rushing yards, receiving yards and sacks allowed for offense, and sacks, tackles, interceptions, forced & recovered fumbles and passes defended for defense. I left out receptions, completions, and rushing attempts when calculating these percentages because those kind of bump heads with the yardage, which is the more important statistic.

Synopsis: Year Two of the Jim McElwain era kicks off against the first of several cupcakes, the UMass Minutemen. You can bet the Gators will be eager to get back onto the field after a horrible end to 2015, but there are still many questions that need to be answered. Here’s their first chance to answer them.

The skinny: UMess might be a better way to put it. The Minutemen were horrible defensively a year ago, surrendering 48 points or more four different times and 62 twice. Now they lose two thirds of that defense. Massachusetts might be OK on offense if they can find a quarterback and a dependable running back to go along with a solid wide receiver corps, but that’s hard to do in time for the first game of the season. It’s a rebuilding year for Mark Whipple, and they’ll get to find out if they’ve made any progress this offseason pretty quickly.

Offensive breakdown: James Sosinski and Ross Comis are currently locked in a battle for the starting QB job. Neither had a particularly impressive spring, though Comis appears to have a microscopic edge right now based on their performances. Both have tendencies to overshoot open receivers, which was on display several times in the spring game.

The good news for whoever wins the job is that they’ll have two decent receivers to throw to in Bernard Davis and Jalen Williams, which is impressive to say about UMass because they lost their top three receivers from a year ago. The Minutemen also return two seniors on the right side of the line in Elijah Wilkinson and Fabian Hoeller- more good news. The bad news is that they have just two scholarship running backs available to hand the ball off to.

It’s worth noting that one of those two running backs, Marquis Young, is quite promising. Young is an explosive back with good vision and shifty feet, and broke out this past spring. Behind him, though, there isn’t much. There is fullback John Robinson-Woodgett, a 242 pound bruiser who got some carries this spring and served as a pleasant surprise when doing so. But again. Two scholarship running backs. It’s worth repeating because you just can’t field a team with no depth at the tailback spot.

Offensive overview: There’s talent in spots, but unless some new faces step up on the offensive line and the Minutemen can get some instant production out of their quarterback, this offense is in trouble. Grade: D

Defensive breakdown: The Minutemen may have a rising star in freshman cornerback Brandon Mangram. Unfortunately for them, that’s an isolated bright spot for a defense with a lot of holes. This defense has even more rebuilding to do than the offense.

UMass has 13 interceptions worth of production to replace, and while Mangram may help with that, they’re going to need more than one cornerback of decent caliber to do it. Names to watch include James Oliphant, Jordin Hamilton and Jackson Porter, who have combined to start in two games. Inexperienced is an understatement.

The closer to the line of scrimmage you get, the uglier it gets for the Minutemen. UMass could only register 15 sacks last year- 9th worst in FBS- and they’ve simply got to fix that if they want to avoid getting dragged up and down the field. They’ll be counting on defensive end Da’Sean Downey to lead the way here, and there may be some young talent in the cupboard in Aaron Kinsey and D’Shan Harley. But I can’t imagine that UMass will be able to replace four starters in their front seven without experiencing some headaches.

Key matchup: UMass QB vs. Florida front seven. If there’s any chance the Minutemen even make a game of this, they’ll need strong play from their quarterback. Of course, they first have to find one. The Gators’ front seven will show no mercy, of course, and so the test will be if whoever wins the job can make some things happen as a result of trial by fire. It’s up to Sosinski or Comis to remain calm, cool and collected when harassed, because failure to do so will merely make for a nice highlight clip for Jalen Tabor or Marcus Maye, and speed up the process of getting routed.

The good news: UMass is the definition of a cupcake. This is the quintessential season opening joke game for Florida (though that’s about to change with neutral site kickoff games against Michigan and Miami on the docket) and so they shouldn’t have too much trouble. Luke Del Rio needs a game like this to start his Florida career, and it’ll give young guys like Tyrie Cleveland, Chauncey Gardner and Antonneous Clayton the chance to announce their presences early on.

The bad news: Florida could make some of those first game mistakes that indiscriminately plague every team. Also, the Gators could be crucified for this game by the College Football Playoff committee if they’re in contention for a playoff spot, since their 2016 schedule also includes North Texas and Presbyterian.

Massachusetts wins if… they force an unheard of amount of turnovers. Like 12 of them. Otherwise, the talent disparity will take its toll sooner or later.

Florida wins if… they don’t beat themselves. No turnovers, no idiotic penalties, no horribly busted coverages, no dropped passes, etc. And the truth is, they could probably do all those things to a certain extent and still win by 20+ points. It’s just not a good habit to get into (obviously).

Overview: It’s extremely difficult to fathom the Gators losing to a team with so many holes on its roster. Breaking in a new QB is probably this Florida team’s biggest question mark, but UMass has such a terrible defense that it’s not going to matter. It’s something of a cop-out to say “Florida is more talented and so they’ll win,” but when the talent gap is this large, it becomes foolish not to factor in. It may take a drive or two for the nerves to go away and the confidence to set in, but it’ll happen quickly enough. Florida kicks it into high gear by the second quarter and runs away with it.