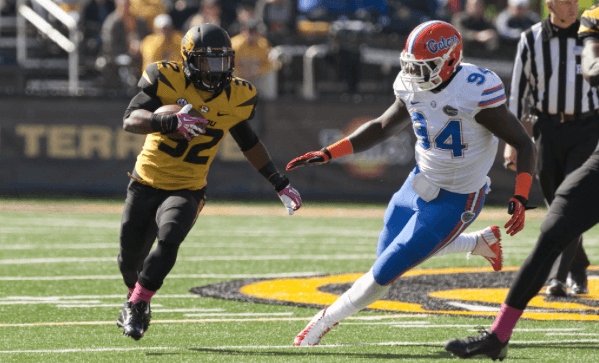 Synopsis: The recently forged pseudo-rivalry between Florida and Missouri heads back to Gainesville, where the Gators will have a chance to tie the all time series at three wins apiece. There’s not much history between these two teams, but one of the few memories that this rivalry has produced is a 42-13 rout of the Gators the last time the Tigers came to visit the Swamp. So Florida has a little score to settle, yes, but bigger picture, this is one of those games that nobody is expecting the Gators to lose. If Jim McElwain’s club is going to make a return to Atlanta, they can’t fall victim to a shocker here.

The skinny: Missouri feels like the answer to the “what happens when you have a great defense and no offense?” question. Alas, they serve as proof that defense in fact does not win championships if not paired with at least a competent offense. In fairness, the Tigers did have a ton of off the field distractions to deal with last year, but their inability to do anything offensively may have been the difference between 5-7 and 10-2. They’ll need to find some answers this year, and fast, or Barry Odom’s first year could be even less successful than Gary Pinkel’s last.

Offensive breakdown: The Tigers are going to need to get more out of quarterback Drew Lock then they got last year, when he didn’t even complete half his passes and averaged five yards per pass attempt. He’s also yet to win a game on the road as a starter. There’s plenty of strength in his throwing arm, and his mechanics are above average, but he’s simply got to start connecting with his receivers if Missouri’s offense is to improve.

The good news for Mizzou is that this year, his pass catchers should be able to help him out. Former five star recruit Chris Black arrives as a graduate transfer from Alabama, which should be a major upgrade at wide receiver. He joins a veteran receiver group that includes junior wide receivers Nate Brown and J’Mon Moore and senior tight end Sean Culkin. And now, the bad news for Missouri: Moore and Brown were Locke’s leading receivers a year ago with 350 and 326 receiving yards for the season. They’ll need to step up big time in 2016. The Tigers do have a running back of respectable quality in Ish Witter, and he did fairly well in backup duty to the injured Russell Hansbrough. The question is whether or not Mizzou can find a second running back to help carry the load. Trevon Walters, Ryan Williams and Shaun Conway will battle it out this summer for some carries.

But whoever carries the ball is in trouble, because Missouri’s offensive line is in shambles. All five starters from 2015 are gone, and the one guy they were counting on from last year, Nate Crawford, announced last week that he’s “medically retired” from the game. The Tigers’ offensive line wasn’t very good a year ago anyway, so almost by default, things can’t get any worse. Now, though, Mizzou is left with just one offensive lineman who’s ever started a Division I football game in Alec Abeln.

Offensive overview: As a unit, it’s hard to do any worse than the Tigers were on offense a year ago, and with returning skill position players, you have to think they’ll be better. But even if Locke, his receivers and Ish Witter all step up and have breakout 2016 seasons, the offensive line is a major concern for Missouri and will hold them back. They’ll be better, but not by much. Grade: C-

Defensive breakdown: Once again, Missouri’s defense will lead the way for the team. And the defensive line may lead the way for the defense. Both defensive ends are back in Charles Harris and Walter Brady, plus all three tackles who played in 2015 in Rickey Hatley, Terry Beckner Jr. and Josh Augusta. The Tigers also get Harold Brantley back, who missed all of 2015 after being in a car accident.

The middle level of the defense should also be considered a strength. Seniors Donovin Newsom and Michael Scherer are both back, and with seven returning contributors in the front seven, Odom and defensive coordinator Demontie Cross can begin to get creative with the defenses they call. Odom’s base defense is a 4-3, which works out perfectly given all the returning experience on the line. This front seven generated 2 1/3 sacks per game last year, and particularly if Beckner can play up to his five star potential, could give teams fits again this year with.

The secondary is the question mark. Cornerback Aarion Penton and safety Anthony Sherrils are both back, but the Tigers will need to find one more at each position to replace a pair of departed starters. Statistically, this secondary was sixth best in the country in pass defense a year ago, but only picked off nine passes on the year. Those are two weird sides to the same coin, and for their sake, it’d really be nice if their defense could generate more turnovers and create shorter fields for their struggling offense.

Defensive overview: Missouri usually employs a pretty solid front seven, and this year should be no exception. But questions in the secondary have me hesitating with the superlatives. Grade: B-

Key matchup: Turnover battle. Sure, you could make an argument that this is the key in any game, but with an offense as bad as Missouri’s, it’s really their only path to victory. The Tigers probably won’t put together too many drives deep into Florida territory, so the Gators can’t give them the gift of starting one there. Also, the history of turnovers in this series is a long and detailed one. Specifically, the winner of the turnover battle has won all five previous games in this series.

The good news: Missouri’s offense is putrid. Yes, there’s finally some experience, but now the Tigers have an entire offensive line to replace all at once. If the Gators have the defense we think they’ll have in 2016, they’ll have a field day against the Tigers. And if the Gators’ defense struggles early in the year, they’ll take out all their frustrations on one of the worst offenses in the country.

The bad news: Florida’s offensive line could be put to the test in this game, and they’d better be ready to answer the bell. Luke Del Rio may not have the time to pick defenses apart the way fans have been counting on him to do, and he also probably won’t face a defense capable of successfully executing so many different looks all year. (Unless he faces Alabama in the SEC Championship, that is.)

Missouri wins if… Florida’s offense repeatedly goes nowhere and gives Missouri short field after short field to work with. Or if the Gators turn it over a bunch of times. Either is a real possibility against a ferocious front seven like this, so don’t kid yourself: this is a game that Florida could lose.

Florida wins if… they hold Missouri to under 10 points. This is going to be one of those games where points are at a premium, and the Gators’ opportunistic defense is more than capable of creating scoring chances against such a weak offense. But they also can’t give up touchdowns on special teams like they did two years ago. However you want to slice it, though, 14 points probably wins this game.

Overview: It’s tempting to pick the Gators to win by some ridiculous number of points for two reasons. First, there’s the obvious hope, i.e. realistic belief, that Florida’s offense will be much better than it was at the end of last year. And second, there was the homecoming debacle in 2014 that had the entire stadium chanting “Fire Muschamp.” This was a moment that, even though the guy responsible for Florida getting whacked in that game is gone, still burns coals of fury in a lot of fans’ minds. Winning 21-3 on Missouri’s home field and sending Gary Pinkel out with a loss in this game last year was nice, but this year’s game, back at the original scene of the crime, with another homecoming crowd, feels like more of a script for a true redemption.

Missouri, though, does have a stout defense, and with Barry Odom calling the shots defensively for the Tigers for the second year in a row, it could be an exceptional one if they figure out their secondary. It’s still not as ferocious a defense as Florida has, or one with as many future NFL Draft picks stockpiled across the depth chart, but it’s a very, very good defense- one that’s capable of frustrating Luke Del Rio for four quarters.

But Missouri simply doesn’t have the offensive firepower to pull this one out, and so there’s just no way I can realistically see the Gators losing this game. Jim McElwain is great at getting his guys ready to play in potential letdown games, either after a big win or a big loss, and with two weeks between this game and the showdown with Georgia, it’s not likely that they’ll get caught looking ahead, either. So they’ll play well enough, weather the early storm that Missouri figures to bring, and melt it away in the fourth quarter.