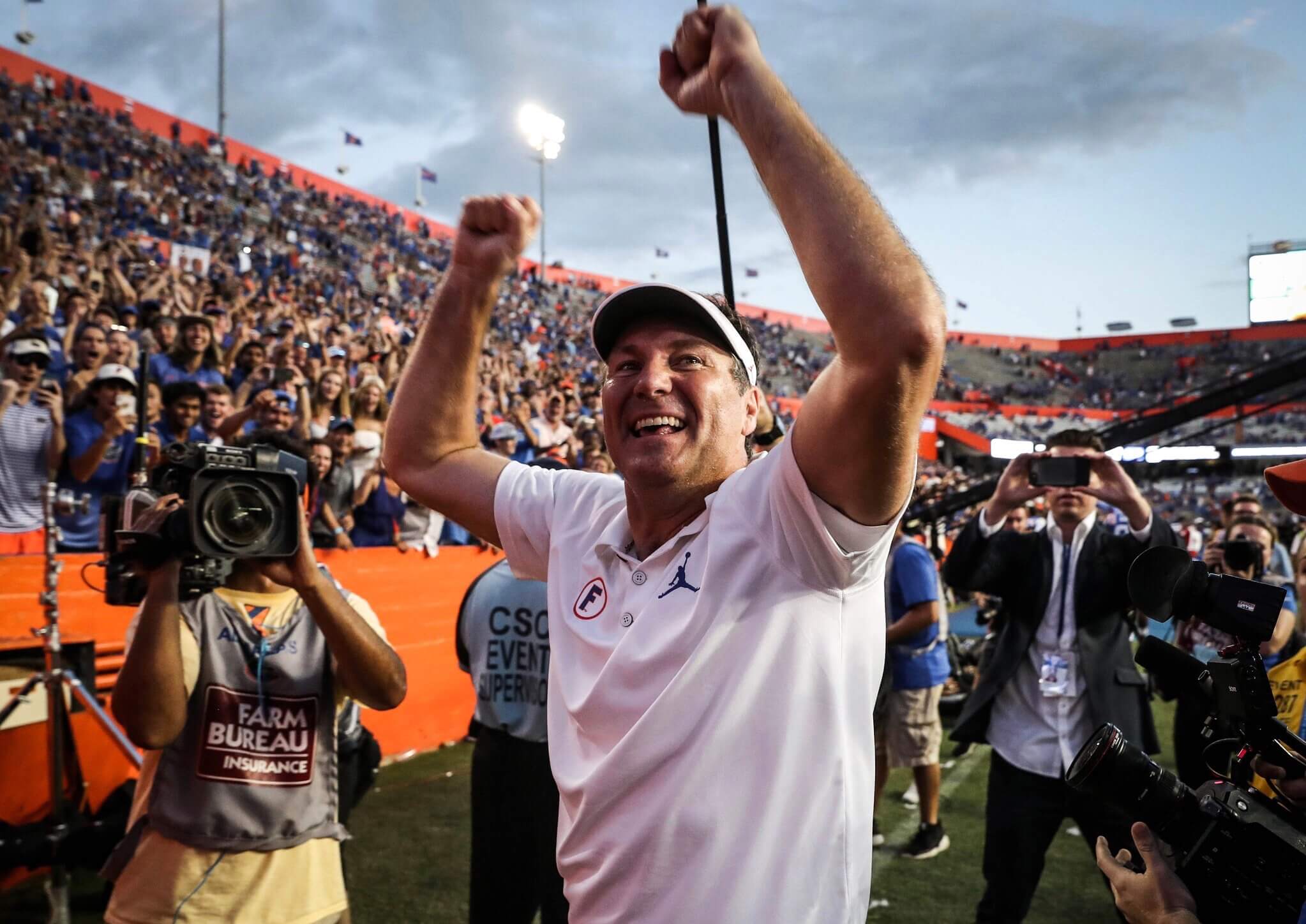 After a failed fake punt call deep in his own territory in the second quarter against Auburn, Dan Mullen did something he doesn’t have to do very often. He apologized for a mistake he had made.

“That was my bad,” Mullen yelled at several defensive players on the sideline after Bo Nix connected with Seth Williams for a 33 yard touchdown to cut Florida’s lead to 14-13. “That touchdown was on me. Forget it. Just keep doing your jobs.”

The Gator defense responded to Mullen’s apology with a performance for the ages that included shutting out Auburn’s highly-rated offense for the duration of the game, and got a little help from their friends on offense in a euphoric, exhilarating and signature 24-13 Florida victory over the 7th ranked Tigers. That marked Florida’s third win over a top ten opponent in Mullen’s first year and a half in Gainesville. It’s also the Gators’ first win over Auburn since 2002, which snaps a three game skid in a rivalry that was once an extremely heated annual affair, but has now been reduced to an intermittent series that’s renewed twice every twelve years.

But far more important than the bragging rights Florida now has over the SEC team the shortest drive away from Gainesville for the next five years is the fact that all of a sudden, the Gators are back on the map and in the national conversation. Many had thought that Florida’s 27-19 win over LSU in the Swamp and their 41-15 blowout of Michigan last year had achieved that effect, but ugly home losses to Kentucky and Missouri had rubbed some of the shine off of those wins and somewhat threw the direction of the program into question (at least if you listen to the national media).

As many had expected, Auburn dominated the trenches when Florida had the ball. The Tigers strip sacked Kyle Trask three different times, and pounced on all three ensuing fumbles. But unlike as many had expected, the Gators were able to overcome this deficiency by making enough plays on both sides of the ball. Auburn finished the game with just 12 first downs and 269 yards of offense; Florida, meanwhile, produced multiple 60+ yard touchdowns and totaled 398 yards on the afternoon.

And the difference was glaring.

The first clue that Auburn was headed for trouble came before fans had even gotten settled into their seats. On Florida’s second play from scrimmage, Freddie Swain caught a quick slant from Trask, put his foot in the ground, turned upfield, picked up a critical downfield block from teammate Van Jefferson, and glided 64 yards through the middle of the field for a touchdown that sent the over-capacity crowd of 90,584 into a frenzy. And less than two minutes into the game, Florida had a 7-0 lead.

But then both teams started handing out goodies left and right. First, Auburn’s Christian Tutt blew into the backfield and leveled Trask, popping the ball out in the process; his teammate Chandler Wooten recovered around midfield, but the Gator defense stiffened and held Auburn to a field goal. On the very next possession, Dameon Pierce was nailed in the head by KJ Britt in a clear missed display of targeting that caused the ball to fall out again, and again Auburn recovered just across midfield. And again the Gator defense tightened, forcing another field goal.

Then came the Gators’ biggest handout of all- which Auburn somehow one-upped. Awaiting a punt at his own ten, Tutt muffed the bouncing ball and Florida fell on it at the Tigers’ two. But Kyree Campbell was flagged for an unsportsmanlike conduct penalty, moving the ball back to the seventeen, and Trask was then strip sacked again, this time by Marlon Davidson. Derrick Brown scooped it up, broke down the left sideline, beat Jean DeLance to the edge and appeared to have a room service touchdown. But Brown suddenly tripped over Florida’s 40 yard line, stumbled forward a few yards and fell harmlessly to the ground at the Gator 33 yard line.

That turned out to be the turning point of the game. Two plays later, Nix was picked off by Shawn Davis, who returned the ball 40 yards down to Auburn’s 33. One personal foul later, and the Gators were set up at the Tigers’ 18 yard line. This time, Florida didn’t waste the opportunity, as Trask connected with Hammond for an easy 13 yard touchdown. And in the span of four plays, what should have been a 13-7 Auburn lead was instead a 14-6 Gator lead.

To its credit, Auburn finally did capitalize on one Gator blunder- Mullen’s mystifying fake punt call. Tommy Townsend never had a prayer, and mere seconds later, Williams caught the strike from Nix, bounced off a tackle and trotted into the end zone to cut the deficit to one again. But Florida quickly countered with a field goal to make it 17-13 at the end of the half.

Then, as if someone had flipped a power switch, the scoring abruptly stopped in the second half. Neither team could generate anything offensively until late in the third quarter, when Auburn finally mounted a drive into the Gator red zone, looking to take the lead. But Nix’s slight overthrow to Williams on a broken coverage forced him to leap for the ball and fall at the 13 yard line; an on target pass and Williams would have walked in. And Auburn paid dearly for that mistake, too, as Nix then threw an ill-advised interception in the end zone to Donovan Stiner.

And whereas Auburn couldn’t complete its game changing play, Florida could. Moments later, LaMical Perine- who Auburn didn’t think was big or fast enough to earn an offer out of high school- took the handoff from Trask at his own 12 yard line, bounced off a tackle, beat linebacker Daniel Thomas to the sideline, and took off on an incendiary 88 yard touchdown run that lit up the Swamp and all but secured the victory. As for whatever doubts may have remained afterwards, the defense took care of that. James Houston IV killed Auburn’s ensuing drive with a sack, and Marco Wilson finished it off with a sliding grab of Bo Nix’s last gasp pass near midfield to start the party.

And now, Florida sits in uncharted waters. Not only do the Gators control their own destiny to Atlanta and the College Football Playoff midway through the season, but they’re in a rare spot where they can lose any one of their next six games aside from Georgia and still be in that exact same position. Of course, nobody wants to think about the prospect of Florida losing a game after arguably the biggest win since Tim Tebow’s playing days- but the point is that this win was so monumental that the Gators now have that margin for error in their back pocket.

Even more impressive has been the complete 180 this team has undergone since Kyle Trask replaced Feleipe Franks. In the span of thirteen Trask-led quarters of football, Florida went from staring a two game losing streak to Kentucky and a Music City Bowl appearance straight in the face to being as logical of a non-Alabama or Clemson CFP contender as any. Remember, Florida was left for dead in Lexington, and in a miraculous team effort from Trask and his friends on defense, the 2019 Gators have banded together and risen from their deathbed- with more to be fearful of than ever.

And the fact that this team has climbed from halfway into their graves up and into the national title conversation in less than a month has suggested that their climb might only have just gotten started.