Move the Gators up in those rankings, people.

Jeff Demps is COMIN’ BACK!!!

It’s not like Tim Tebow is returning. But it’s everything short of it. This guy can motor.

Wait, what am I saying this for? All you guys know this already. Yall watched him torch defenses for three years now, and his fourth could be even worse for opponents. 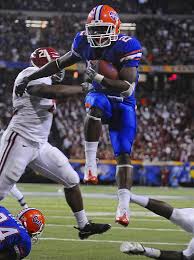 Charlie Weis is no idiot, like Addazio was. And Demps didn’t do so badly under Stevio. He had two great games, and then a so-so reat of the season- a season plagued by injuries and Addazio. Anyway, what makes Charlie Weis such a genius, above all other things, is that he toys with matchups and exploits the mismatches. And with a team like Florida, it’s pretty easy to find them, even with a roster recruited to run a spread offense. That’s an easy fix for Weis.

My guess is that Demps will be a legitimate running back who also lines up at slot receiver.  He’ll have to get some touches up the middle. That’s just part of being a running back- you just gotta be able to lower your shoulder and power forward. Even if you’re a fast little SOB like Demps, it’s just part of the package. If Demps just runs outside, that’s what the defense will play- at least three guys on each side, waiting for him.

But that will be what gets Demps his big yards- running sweeps.

It’s like this: you’re offered a job as an assistant coach. You have to clean up after your players some, but when you do what you know best- coaching your boys up- it’s a lot better for you. But you have to play janitor every once in awhile in order to get to the good parts.

Track? That can wait. He’s said numerous times, and Will Muschamp has backed him, that he is committed to playing out his senior season on the football field. Whether track takes him to Italy, Korea, or Texas, Demps has said that his first love is football.

“Football has been my first love, but I also love running track. All of my coaches have been very supportive and I’ve always been able to concentrate on whatever sport I’m competing in that season. I concentrated on track this past spring and summer, and now I’m ready to concentrate on football,” said Demps, before adding, “I’m looking forward to getting back together with my football teammates and having a great senior season.“

And then Muschamp hammered the final nail in the rumor’s coffin with this: “As I stated last week in Birmingham, Jeff Demps will be joining our football team when our squad reports to camp on August 5th.”

4 thoughts on “Gators’ Demps To Stay for Senior Season”