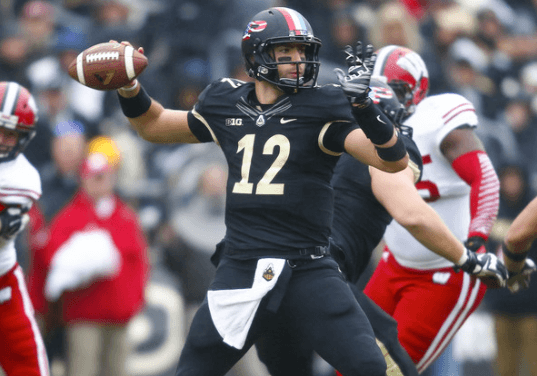 The Gators’ most noticeably thin and weak position just added some more depth.

Purdue quarterback Austin Appleby, a junior who graduated early, has announced that he will transfer to Florida. He’s eligible to play immediately as a graduate transfer and has one year of eligibility left.

Appleby had an up and down career at Purdue. He took over the starting job midway through the 2014 season and held it through the first three games of 2015. But after Purdue got thumped 51-24 by Virginia Tech, Appleby ceded the keys to the offense to freshman David Blough. When Blough suffered a concussion late in the year, Appleby retook command of the offense for the Boilermakers’ final two games. He finishes his 12 game career at Purdue with 2776 yards, 19 touchdowns, 19 interceptions, and most importantly for his locker room cred, one awesome stiff arm.

The next question is: can he play at Florida? The honest answer is, I don’t know. He’s got the skill set you’re looking for with a Division I quarterback, for sure; he has solid arm strength, a relatively accurate arm and is equipped with the smarts to pick up a new offense fairly quickly. The 19 interceptions he threw in basically one full season is somewhat alarming, but he’s certainly got the other necessities you’re looking for in a quarterback.

It feels like something of a band-aid to grab Appleby, truth be told. But given how horrible Treon Harris was this past year, any help is welcome. And even if he doesn’t beat out Luke Del Rio and Feleipe Franks, at least Jim McElwain will finally have some depth at a position in which the Gators have been thin for years.