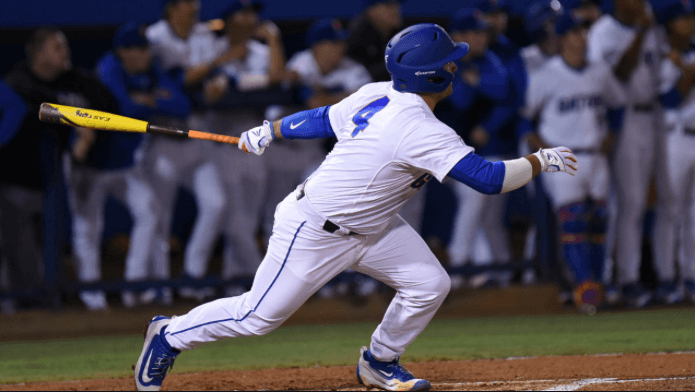 Nick Horvath’s three run homer to bury Tennessee in Sunday’s rubber match gave Florida a series win that certainly could be described as crucial, or huge, or any such adjective.

But maybe not for the reason some may think.

It’s not because the Gators forced a tie with South Carolina atop the SEC standings. It’s not even because Florida continued to gain momentum, or provided Kevin O’Sullivan the opportunity to provide any other coach speak answers about how big the win was.

No, the series win over the Vols was huge because it ensured that the Gators’ path to their ultimate goal- a national championship- was made the easiest it could possibly be.

By not stumbling to the Vols, the top ranked Gators essentially guaranteed themselves a top eight national seed for the NCAA Tournament, which means that they will host the entire postseason all the way through the College World Series. And while that looked like a safe bet anyway with a combined 9-3 record against the current top five, don’t fool yourself into thinking it was written in stone before this weekend; Florida’s final two series are against top fifteen teams in Vanderbilt and LSU. Having survived Tennessee, the Gators can now literally lose every remaining game on its schedule, and that includes the SEC Tournament, and they’re still a lock for that top eight seed.

Florida’s pitching was, on the whole, fine this weekend, although far from perfect. AJ Puk has had and will have better performances, struggling on Saturday before getting pulled in the fourth inning, and star freshman Brady Singer gave up a couple of hard hit balls in extended relief work, including a triple down the right field line. Even the ace, Logan Shore, gave up seven hits in six innings of work; that’s certainly not terrible, but it’s not national championship stuff, either. And none of this is any cause for alarm. It’s a mere reminder that the Gators’ tremendous pitching staff has off days, too, and if any of that is Florida’s pitching staff at its absolute worst, I’ll take it in a heartbeat.

But there’s no ambiguity here. The Gators won this series with clutch hits, and with some power at that. In the Friday win, Peter Alonso got Florida started with a double that drove in two runs to right, and the Gators pulled away with ensuing homers by Jonathan India and Mike Rivera. The synopsis for Sunday’s win was similar: Dalton Guthrie’s two out, two-RBI double gave Florida some breathing room, and subsequent homers by Mike Rivera and Nick Horvath put the Vols away.

On an average day, Florida’s pitching and defense will be what carries this team. This pitching staff and defense are just too talented not to. But sometimes, you have to win with something other than what carries the team, and that was the case this weekend. Luckily, the Gators’ offense also happens to be pretty damned good as opposed to just being dragged along by the pitching staff, and they came through when they needed to this time.