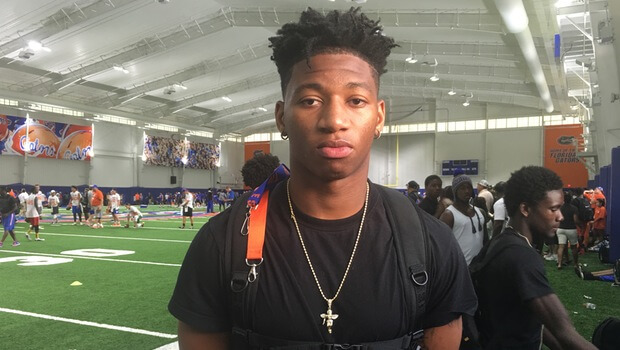 For the second weekend in a row, the Gators will be hosting a large list of talented prospects. This time around, though, the players visiting UF will be taking their last visits before Signing Day, so the Gators will have the opportunity to close with a lot of their top targets.

Here is the list of players visiting, along with the thought process behind each one:

The Virginia Beach prospect and his brother Brandon have long been committed to UMD, but they’ve been hearing it from the Florida coaches recently and now they’ll get a chance to see it all for themselves. Breyon in particular has an offer list that spans over a mile long and the two feel like a package deal. Florida probably has to fend off Tennessee and Maryland, but if the two enjoy themselves this weekend, flips may be impending.

The only real difference between Brandon and Breyon is that the latter has real interest from FSU and Oregon (insert 59-20 joke here). Florida will still have to beat out Tennessee and Maryland to land Brandon, but again, the two have been growing increasingly interested in the Gators in recent weeks, so Florida may be able to close with both if they can make a good impression this weekend.

The loss of Elijah Blades can immediately be countered by picking up Stewart, a quick and physical corner from New Orleans. UF is thought to be the leader for his services, and getting the last visit certainly helps. But Arizona State, LSU, TCU and Arkansas are all hot on the trail. Let’s see if Florida can take advantage of getting the last word in and close.

Oh, you know, just one of several prized defensive linemen that will be on campus this weekend. No big deal. Truthfully, Alabama feels like the leader by a long shot, but getting the last visit before Signing Day is something you have to factor into the equation. The Gators are going all out for him, though, with McElwain visiting him in his Madison, AL home last night. But his main recruiter all along was the dearly departed Geoff Collins, and so the Gators have their work cut out for them with him this weekend.

Given that Florida just offered him last week, and that he’s been committed to the Sooners for a whole year, this reeks of a kid who just wants to have fun one last time. Still, the need for playmakers on offense means the Gators could sell him early playing time, but his relative unfamiliarity with the Gator recruits and players probably means he’d rather battle it out with the Sooners. Don’t count on this one.

Florida could probably take Hillery away from Miami if they want to, but do they want to? Florida’s interest in him has been lukewarm at best, and remains that way even now as they’re suddenly going all out with other kids they’ve had no previous contact with late in the game. Hillery has some potential, though, so the Gators would do themselves a favor by stealing him.

The once Miami Hurricane commit still seems to be leading toward UM, but then again his decommitment came just after receiving a Florida offer. His relationship with new defensive coordinator Randy Shannon should help, and the Gators could pitch the idea of early playing time given the complete facelift the secondary is about to undergo. Miami still feels like his destination, but you never know.

Unfortunately, Wyatt appears to be taking this visit just so he can enjoy the royal treatment one last time. He’s really down to Georgia and South Carolina, and unless Florida can make some sort of unforgettable impression on him, they’ll be seeing him next in a rival’s jersey.

Moments after Blades decommitted, the Gators sent an offer to Stiner, a current Houston Cougar commit. Stiner can definitely play, but the question now is whether UF really has a shot with him so late in the game. He doesn’t have an offer quite as prestigious as Florida, though, so the idea of playing big time college football is appealing to him, UF would be the way to do it.

The Gators are entering the race for Chaisson relatively late, but here’s their shot to pull off a seismic recruiting upset and land an incredibly talented prospect. He’s thought to be between Texas and LSU, with Baylor and Colorado also in hot pursuit. Florida getting the last visit with him is of gigantic importance, and if they can pull off this flip alone, they could finish with a top ten class.

Byrd is here to solidify a commitment that was solidified a long time ago. He’ll definitely have some things to say to the uncommitted guys, but he feels like he owes it to himself to finally take an official visit to the school he’s been committed to for a whole year.

It’s all about grades for the ultra talented UNC commit turned Gator commit turned decommit. Florida wants him back, and it’s certainly encouraging that they have him coming back to visit this weekend. His situation is far from cleared up, though, so we’ll have to wait and see how that plays out. But if he gets it all figured out, Florida would be getting a supremely talented tailback.