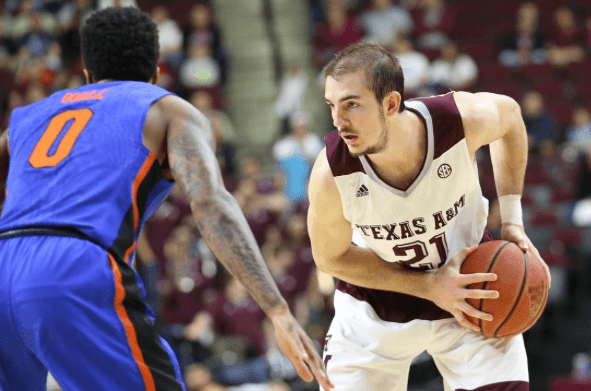 Mike White’s basketball team competed for 40 minutes, a stark improvement from their last road trip, but lost the first game of a two game road trip 71-68 Tuesday night against # 15 Texas A & M. The defeat drops the Gators to 1-4 in true road games on the season and 10-6 overall. While Florida remains in Joe Lunardi’s latest bracket (as a nine seed), these are the types of wins that improve your spot on the S-Curve and can become decisive come Selection Sunday when the committee is trying to sort out bubble teams.

Billy Donovan did Mike White very few favors schedule-wise, leaving White with what to date is the toughest schedule among teams in a power conference, at 7th per Ken Pomeroy and even higher on the BPI.

.@GatorsMBK has the toughest strength of schedule among all Power 7 teams (7th toughest overall) according to @kenpomeroy.

This helps the Gators, of course, when the committee is weeding through bubble teams, and the Gators have been close against elite teams on the road twice- in December against Michigan State and Tuesday night. Still, history suggests it isn’t enough to play a brutal schedule- you have to win games too. Florida has a quality win over LSU, and a pair of reasonably good wins over Richmond and Oklahoma State, but the Aggies, who have one of college basketball’s best resumes to date, would have been an outstanding scalp.

Here are four other thoughts on the loss:

With the game tied at 47-47, the Gators committed two costly turnovers and scored only two points in five minutes, allowing the Aggies to build a ten point advantage. The Gators stormed back, however, partly behind the play of Kasey Hill, who blocked a shot, grabbed an assist and steal and made a transition layup in helping Florida cut the two in the span of a minute. A & M again stretched the lead, but with Florida down only four Kasey Hill was fouled driving to the basket and had a chance to cut the lead to three or even two at the line. Hill missed both shots, then committed a turnover, missed a layup and  an ill-advised jumpshot in a crucial stretch of the game when A & M was struggling to stop Dorian Finney-Smith. Florida ultimately cut it to one on a Finney-Smith three, but A & M’s ability to convert at the stripe with the game on the line was the difference.

Hill, who finished the evening with 7 points, played well defensively but his mental errors were devastating down the stretch and all were correctable mistakes that a junior and veteran of a Final Four shouldn’t make at this stage in his career. Forget the five star rating Hill came to UF with– at this point any player should be playing smarter. Hill is marvelous when he looks to distribute first and plays within himself- he’s nowhere near as good when he forces things and tries to score first. And his free throw shooting makes him a liability in any rotation in a close game, especially on a team with only two good free throw shooters.

The Gators are improving under Mike White, but haven’t put a complete game together.

The rumbling from Florida fans about Mike White is fascinating, a kind of obvious yet subtle commentary on Florida basketball fans as a whole. On the obvious side, there’s the reality that Billy Donovan is a Hall-of-Fame coach who defined Florida basketball for almost two decades, as the Gators are among the ten winningest programs this century. Donovan isn’t replaceable.

And yet Gators fans seem restless with White already, suggesting the young coach isn’t up for the job or that Jeremy Foley outstmarted himself with the hire or other things.

The subtle commentary is that Florida basketball fans, as a general rule, aren’t the most engaged to begin with, which is why they can renovate the arena and diminish seating capacity and only a handful of die-hard season ticket holders blush. It’s one thing, however, to be less than engaged– that’s common in the football mad south. It’s another to be less than engaged and entitled, and Gators fans complaining about White and longing for Donovan are of course doing both.

Further, they are doing both without paying much attention. Against an elite schedule, White has a team, the core of which finished 16-17 under Donovan, improving and doing so against an extremely difficult schedule. White is using the players he has properly and getting the most out of most of them.

Transfer Justin Leon is one example. The junior has been outstanding since his insertion into the starting lineup, and against a good defensive basketball team he went 7-8 from the floor, and continued to give the Gators a pulse beyond the arc. Leon found himself in foul trouble late, which was certainly costly as the Gators searched for offense in a tight game.

Florida is playing terrific team defense (still)- holding A & M to a home low 71 points and frustrating the Aggies offensively, particularly in the first half.

The Gators probably win the game without 17 turnovers  (6.5 above their average, which was the lowest number in the SEC entering Tuesday) or if they don’t shoot 4-12 from the free throw line. And they still had a chance to tie the game late because they played great defense, and because they shot the ball better- 44.5 percent from the field and nearly 40 percent (10-26) from the arc. And all of this on a night where they received no contribution whatsoever from freshmen star KeVaughn Allen (0 points, 2 turnovers, first half foul trouble.)

That’s good effort and good coaching, especially in a game on the road against the team that likely wins the SEC regular season championship.

This is a team that can get better.

Egbunu can be more consistent.

Alex Murphy could come back and give this team another inside-out threat.

But if there is one thing that the Gators need most, it is better play out of talented wing Devin Robinson, who played only 16 minutes and has really struggled since a terrific outing against Georgia. Robinson is a pro-caliber talent, but like Casey Prather before him, he doesn’t seem to have figured out what he does best yet. If White’s team is to make any noise in the SEC or postseason, they’ll need Devin Robinson to make a late-season leap.

Florida has another chance to capture a good win Saturday night, against an Ole Miss team that can really score, but doesn’t defend much.

Both these teams could end the year on the bubble, which is why I wrote after the LSU game I felt Florida needed to split this difficult road trip.

The Rebels are 2-0 in their new home building, and Andy Kennedy credited the energy in the new Tad Pad for the team’s come from behind win over Georgia last weekend. The Rebels are led by Stefan Moody, the early frontrunner for SEC Player of the Year (sorry, Ben Simmons). Moody is averaging nearly 24 a night and poured in 33 last night in a 90-81 loss to LSU. Moody is precisely the type of player who can get hot in a hurry, like Kevin Punter did in Knoxville last week, and the way Florida struggles offensively, he’s the kind of player who can shoot the Gators out of a road game building if he gets hot early.

The good news? Ole Miss is second to last in the SEC from outside regardless, and entered the LSU game shooting a frosty 25.6% from bonus land despite Moody’s ability to light it up. That means the Gators will need to get off screens and rotate quickly to keep Moody at bay early. Contain Moody, and Ole Miss doesn’t have a ton of help offensively.

On the other side of the ball, while Florida should be able to get to the rim and score against an Ole Miss team that ranks 135th in defensive efficiency, per KenPom, the Rebels are +4.5 in rebounding margin, meaning like most Andy Kennedy teams, they don’t give up a ton of second chance points. That’s been a tough recipe for success for a Gators team that is at their best when they can clean up misses, and the Gators, who have lost only once this season when they’ve won the rebounding battle, will need to clean up the glass to have a chance to win a game they truly need.

One thought on “In College Station, Gators Squander Opportunity For Great Resume-Building Win”