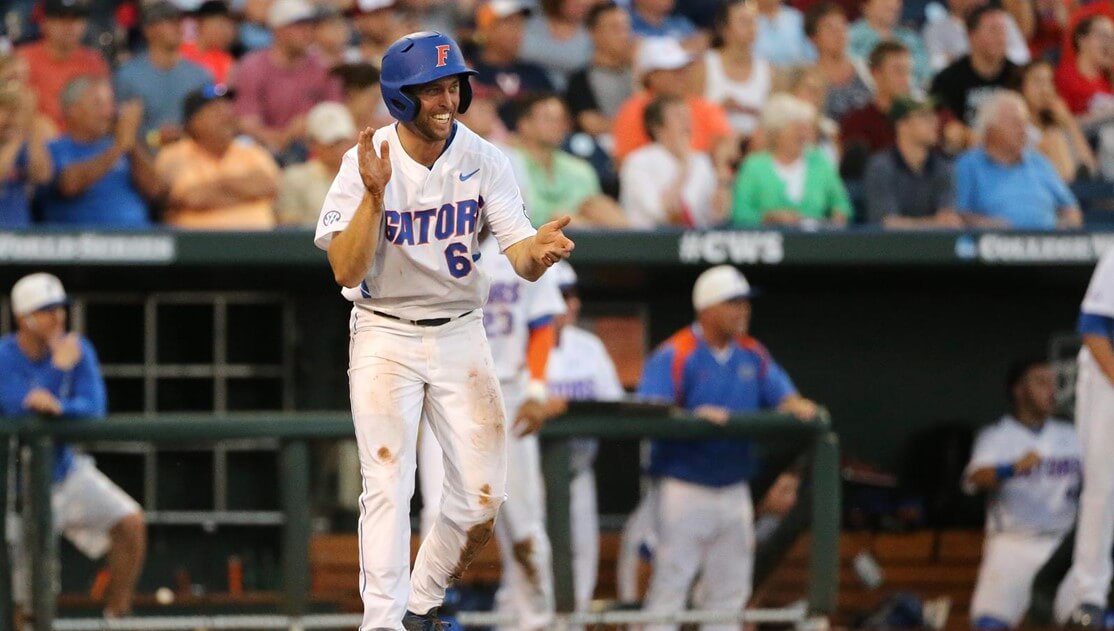 Despite having won 17 different games by one run this season, the Gators hadn’t won a single one via a walk off.

They picked a pretty good time for their first.

With the bases loaded and two outs in the eleventh inning, Ryan Larson belted a line drive into center field give Florida a 2-1 win over Wake Forest in Game One of the Gainesville Super Regionals. Larson was playing in his first game back after slipping and taking a ball off his face in the SEC Tournament last month- boy, did Florida miss him in last week’s Gainesville Regional- and delivered just the fourth hit of the game for the Gators when they needed it most. The win puts Kevin O’Sullivan’s club just one win away from booking passage to Omaha for the College World Series, a to which he’s guided his program five times in the last seven years.

If Sully gets the type pitching like he got in the opener, that shouldn’t be a problem.

Florida pitchers combined to strike out 23 Wake Forest hitters on the day, with three of Demon Deacons’ top six hitters striking out three times or more. Alex Faedo had started the game by going four scoreless innings, during which he fanned nine, when the rain came. The downpour included multiple lightning strikes within eight miles of McKethan Stadium and by the time the game resumed, nearly four hours had elapsed. That meant that Faedo was done for the day, so O’Sullivan took a gamble and replaced him with his projected Game Two starter, Brady Singer. And Singer picked up right where Faedo left off, mowing down the Deacons in the fifth, sixth, seventh and eighth to send the game to the ninth, at which point it looked like Dalton Guthrie’s RBI groundout in the third would stand as the game’s lone run.

But then O’Sullivan took another gamble by removing Singer- who had struck out eight and been virtually untouchable- in favor of closer Michael Byrne. No sooner had Byrne stepped onto the mound than he surrendered a game tying homer to Wake Forest’s Ben Breazeare. And though the Deacons were subsequently retired without doing any more damage, the game continued.

To his credit, Byrne battled back and held the Deacons at bay in the tenth and eleventh. And given Florida’s propensity for winning close games, it was only a matter of time before the Gators mounted a rally.

Jonathan India got the eleventh started by drawing a walk and easily took second on the ensuing wild pitch. O’Sullivan then made his third seismic gamble of the night by ordering Dalton Guthrie to bunt with two strikes- and this one blew up in his face when Guthrie fouled it off. But Wake’s Griffin Roberts then hit the next two batters to load the bases and set the stage for Larson.

One line drive up the middle later, it was over.

Now Florida finds itself one win away from its sixth trip to the College World Series in the last eight years. And if the way they’ve been able to pull out close wins all year is any indication, this year’s team is about as well prepared as it could ever be.