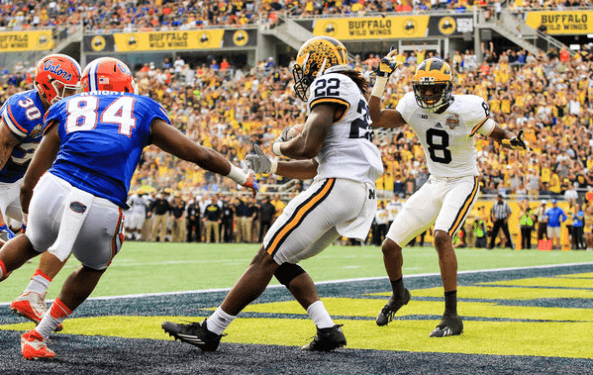 What started as a season of promise slowly unraveled into one of just doing enough, turned into disaster and ended in the lowest way possible as Michigan thumped Florida 41-7 in the Citrus Bowl. Here are the key notes and takeaways from the game:

It was over when… Down 14-7 late in the second quarter, Florida was driving to tie the game. But Treon Harris was intercepted in the end zone on a ball he should have never thrown, and Florida not only didn’t score again, they never even threatened again.

Play of the game… It went to complete waste, but Florida’s lone touchdown of the game came on what may stand for the next 364 days as the wackiest touchdown of 2016. You just have to watch it:

TOUCHDOWN GATORS!!! This is the most hilarious touchdown you will ever see, btw https://t.co/D7yeYBf1Mq

Game ball goes to… Michigan QB Jake Rudock. The transfer from Iowa played a hell of a game in his final collegiate performance, going 20-31 for 278 yards and three touchdowns. Give credit where it’s due: he absolutely lit this Florida defense up.

Stat of the game… 1,035. No, that’s not the number of yards Michigan finished the game with, even though it feels like it. It’s Kelvin Taylor’s season rushing total. I’m pretty sure the fact that he rushed for over 1,000 yards, and that he eclipsed that mark today, won’t be what this game was remembered for. But it’s worth pointing out, because it’s quite an accomplishment.

What to be proud of… Today? Nothing. But in a rebuilding year, Jim McElwain’s club finished with double digits in the win column, clocked rival Georgia and won the SEC East. Now, just imagine what a McElwain coached team can do with an actual quarterback

What to work on… Florida’s defense was absolutely awful, but they were playing for draft stock or individual locker room cred- and it showed. That game was no indication of how stout this defense usually is or how stout it will be next year when the reset button is hit. The offense? Yeah, it needs some extensive work. The first order of business this spring will be to find a new quarterback. After that, an offensive line must be built, and then it’ll be time to find playmakers not named Callaway. Then again, we knew all this before today anyway.

Bottom line: Florida lost, but it’s OK. They’re leagues better as a program than they ever were under Muschamp, and there’s hope for the future. This team got absolutely embarrassed today… in a game that ultimately meant nothing other than whether Florida would finish with 10 or 11 wins. Realistic fans knew something like this was going to happen all along, albeit maybe not in a fashion quite so lopsided. But this team got shown up on big stages it reached with a key player who’s no longer on the team, and otherwise would not have gotten to unless you care to explain how Treon Harris could have led this team to an SEC Championship Game and a Citrus Bowl had he started and gone the full season as the team’s sole quarterback. Having already gotten this program back to national relevance, McElwain’s next task is to find a new player who can guide Florida back to those same big stages and then not get himself suspended so he can actually play in them. And when he does that, the Gators will be right back where they were in the short lived Will Grier days- in the mix for a national championship.

3 thoughts on “Michigan 41, Florida 7, Instant Analysis: Michigan curb-stomps Florida in a rough ending to a season that still spawns hope”