Uncategorized The Chase to Atlanta- Week 6

Now that we’re 5 weeks into the season, I’m going to start something new, called the Chase to Atlanta. It’s very self explanatory. It will go into detail about what has to happen for the Gators to win the SEC East and make the trip to Atlanta for the SEC Title Game.

Of course, SEC East teams will all play each other and therefore have losses, but this is forgetting that until that actually happens.

So here is the first edition: 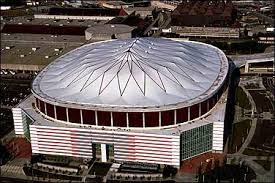 What Florida Has To Do

In order to completely control their own destiny, the Gators must at least win one out of their next two games. Doing so will leave them with no more than two losses, and since everybody else in the East has at least one, a Gator sweep of the three remaining SEC teams would guarantee a spot in Atlanta. Everybody would then have at least two SEC losses, and the Gators would get the nod because of the head to head wins.

What Florida Can Afford

As of right now, the Gators can afford one loss in their next two games, since Auburn and LSU are both in the West. Mathematically, there will eventually be a little more breathing room as other teams knock each other out of the race, but until that happens, Florida can only afford one loss.

What Must Happen Around the SEC

This weekend, we Gator fans are the biggest Tennessee and Kentucky fans alive. They even wear orange and blue! They play Georgia and South Carolina respectively. I’m assuming Florida will lose to LSU, because, come on, it’s the top ranked team in the nation, and in their house, though strange things have happened there so don’t completely give up on the thought of an upset.

If both our teams win, the Gators can afford two additional losses, to LSU this Saturday and Auburn next Saturday and win the rest and wind up in the ATL.

Tennessee, though they would only have one loss after this week, will not be staying there- not with South Carolina, Arkansas, LSU and Alabama still looming. They need to lose at least two games (no problem with this gauntlet) to have three losses, and then Florida would own the tiebreaker.

Georgia would have three losses, and Florida would own that tiebreaker, too.

Kentucky (0-2) and Vanderbilt (1-1), until they prove otherwise, are not worthy of consideration since I believe they will both lose to each of the four teams in contention. Just for insurance, I’d like Alabama to beat Vanderbilt. Can you come through Mr. Saban?

LSU is favored by 14 points, but it could be so much worse. A true freshman QB in his first start is never a good thing in Death Valley, and combine that with losing the battles in the trenches and Florida’s got slim chances. Remember though, they had slim chances in 2003 and won that game.

Georgia has to go to Knoxville, where Tyler Bray and a potent offense will be waiting. Even without Justin Hunter they are explosive, and what will result is a high scoring shootout. This game could go either way.

South Carolina lost to Kentucky a year ago, and it could easily happen again this year. True, it is in Columbia, but the whole QB mess is a gigantic distraction at best and will result in a dysfunctional offense at worst. Luckily for SC, the Cats are pathetic on both sides of the ball.

Everybody’s been saying how easy Georgia’s schedule is. Yet I look at their schedule and I can see as many as five SEC losses. They already lost to South Carolina. They should lose to both Florida and Auburn, and then, being Georgia, they could lose a game or two they’re not supposed to- typical of Mark Richt teams. But they do have the easiest road to Atlanta- so root against them in any competition whatsoever. Not just because they’re Georgia, but also because they could be a real factor.

Root for Tennessee against any SEC East team. The trio of SEC West teams on their schedule (@Alabama, LSU and @Arkansas) will tear them to shreds. They won’t be an issue. They can start by beating Georgia on Saturday. That would help a lot.

South Carolina is in the same boat as Florida- QB issues, 2-1 in the SEC and that loss was to an SEC West team, so they can win out and win the SEC East. But they’ll have just as hard of a road as Florida- Arkansas and Tennessee on the road and Florida at home. Rooting against them would be advised.

They can do this- with no help at all, they can lose to either LSU or Auburn and win all the other games and win the East.

But the good news is, they’re probably going to get help. Look at the schedules of the other SEC East teams. They’ll beat each other and then lose to SEC West teams.

It’s very possible that Florida makes it to Atlanta…

3 thoughts on “The Chase to Atlanta- Week 6”