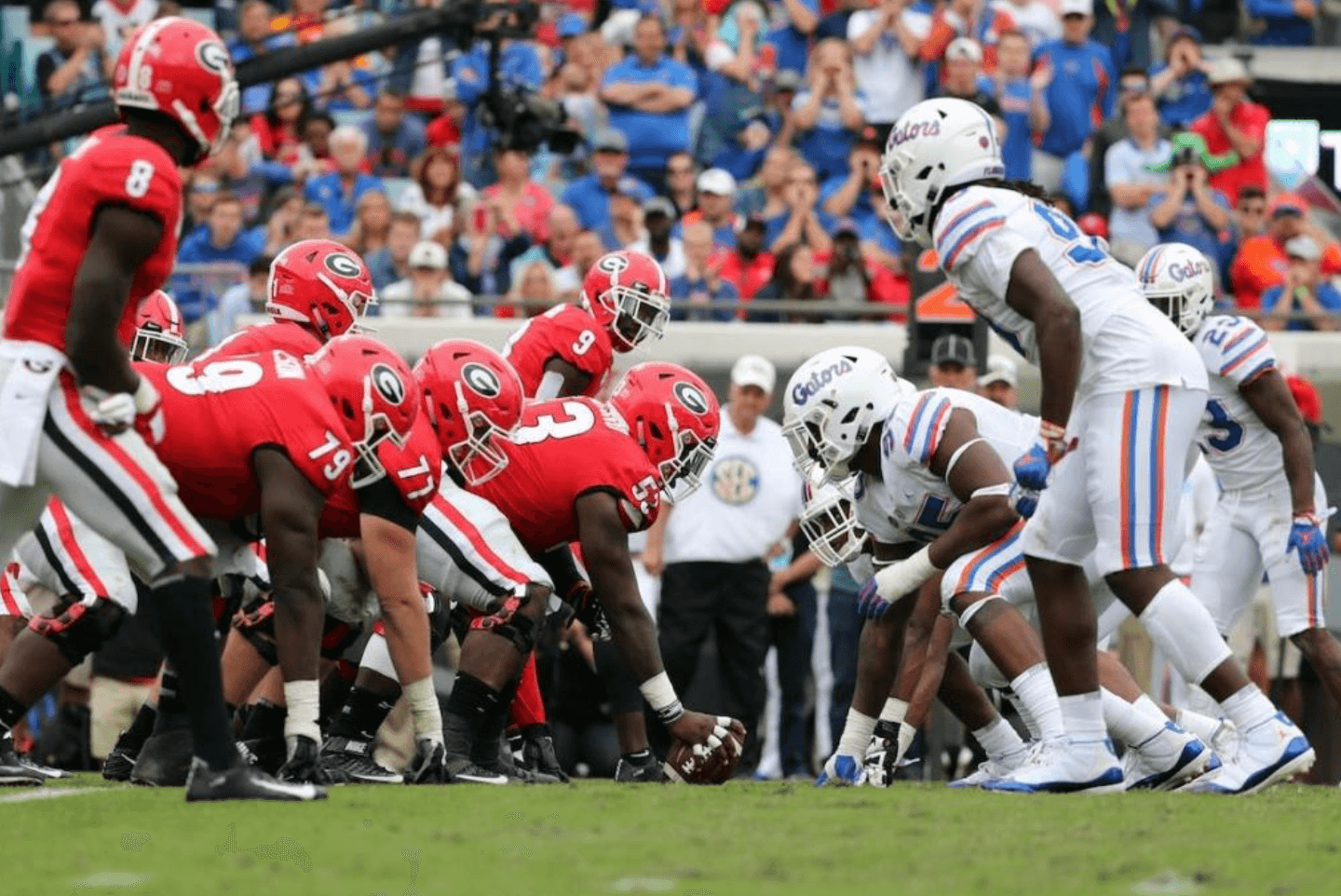 It’s at this point in the week that I normally go into the analytics of the Florida Gators and their opponent. The problem is, there’s nothing about the Florida-Georgia rivalry that’s normal. And as I like to say both in and out of sports: those who fail to remember history are doomed to repeat it.

Well, I suppose we should probably begin with the fact that the Gators and Bulldogs swap turns owning each other for two decades at a time. Streaks of three or four wins in a row in a rivalry are not uncommon, but every twenty years, like clockwork, dominance shifts as one team wins at least two thirds of the games in that stretch. And the manner in which the team on the top of the seesaw wins is often beyond comprehension.

The Florida-Georgia rivalry has seen Vince Dooley, notoriously buttoned up and conservative, dial up the one trick play in his life. A reverse to tight end Richard Appleby suddenly turned into an 80 yard touchdown pass to Gene Washington in a 10-7 Georgia win in 1975.

The Florida-Georgia rivalry has seen a screen pass turn into a game winning 93 yard touchdown pass in the final minute. Florida’s failure to corral Lindsay Scott on this little dump off pass from Buck Belue gave Georgia a shocking 26-21 win that kept Georgia’s national championship hopes alive in 1980.

The Florida-Georgia rivalry has seen a last gasp, game tying touchdown pass get negated because of a timeout called by an opposing defensive back and then that same defensive back subsequently get flagged for pass interference on Take Two of that last gasp play. Florida finally got the game winning stop- legally- on the third attempt to run the final play.

The Florida-Georgia rivalry has seen the team on the wrong end of the series sprint onto the field en masse and dance right in their opponents’ faces- with the distinct goal of drawing an unsportsmanlike conduct penalty- in a 42-30 win in 2007. And this rivalry saw the team that got victimized by that turn it into their fuel for the next twelve months and utterly eviscerate the team that pulled off the flash dance mob the following year, 49-10.

And recently, the Florida-Georgia rivalry has seen the unknown become folk heroes and the unsuccessful find immortality. See 2010, when punter and struggling backup kicker Chas Henry drilled a walk-off field goal in overtime for Florida. See 2014, when Florida’s Michael McNeely, a part time grocery bagger at Publix, take off on a fake field goal touchdown run. Or see Florida’s Treon Harris, who completed a grand total of eleven passes in two starts against the Bulldogs- and in a bragging right that Gator fans will never not find hilarious, won them both. Those two wins Harris earned as the starting quarterback in this series are more than all time greats Matt Stafford, Emmitt Smith, Knowshon Moreno, Steve Spurrier, DJ Shockley, David Greene, AJ Green, and even if he wins tomorrow, Kyle Trask.

Of course, the building blocks have to be in place for one team in order for things to get strange. We know who these teams are, or at least who they’re supposed to be. Florida has an explosive offense highlighted by a Heisman Trophy candidate at quarterback in Kyle Trask, an unfairly explosive weapon in Kadarius Toney, and a second natural mismatch in tight end Kyle Pitts. Georgia, meanwhile, has an offensive line that lost two first round draft picks yet may somehow wind up being even better than a year ago, a pair of dangerous backs in Zamir White and James Cook, and a defense that’s been lights out against everybody not named Alabama.

But being the Florida-Georgia game, neither team is dealing with an ideal situation. Because of course they’re not.

The Bulldogs’ defense is seriously depleted, down starting safety Richard LeCounte and at least one (Julian Rochester) and potentially two starting defensive linemen pending the status of Jordan Davis (who Kirby Smart swears is still day-to-day). And several more contributors are banged up on both sides of the ball, including safeties Tyrique Stevenson and Lewis Cine, linebackers Quay Walker and Monty Rice and running back Kenny McIntosh.

For Florida, starting defensive lineman Zach Carter will have to miss the first half due to his role in last week’s bench clearing brawl vs. Missouri. The Gators don’t release injury information anymore, but they were down three starting defensive backs plus starting kicker Evan McPherson last week and it’s fair to wonder if they’ll be back tomorrow- or if anybody else will be missing.

Yet if we’ve learned anything from this unique rivalry, it’s that the door is opened up for new faces to shine and write themselves a chapter in Florida-Georgia lore. And for one team or another, somebody will.

If Florida’s going to win, it means that their shaky defense is going to have to play its best game of the season. Who’s going to be the one to step up and take charge? And if Georgia’s going to win, some of their highly promising but largely unproven backups will have to announce themselves and fill in for the missing starters seamlessly; who might that be? Is this the game that Georgia quarterback Stetson Bennett IV decides to turn in the best performance of his life, or is this the game that Kyle Trask decides to make the centerpiece of his Heisman campaign? If Georgia chooses to double team Kyle Pitts, does that open the door for a Florida running game to magically come to life like it did in 2014? And inversely, if the Gators stack the box and dare Bennett IV to throw, can the Georgia receivers suddenly look like Biletnikoff candidates?

But for all the unknowns, one thing we do know is that for the loser of this game, the season is essentially over, and for the winner, the season has just begun as all kinds of postseason glitter becomes real. Thus, the heroes of tomorrow- whoever they may be- are going to be responsible for their team not just winning the Cocktail Party, but taking that first real step towards a national championship. For all the weirdness that both this series and this year have brought us, at least that remains the way it should be.

So with that said, let’s get weird. Let’s see what tomorrow’s high-stakes showdown on the banks of the St. John’s River brings us. Let’s see who emerges as the hero, what previously assumed weaknesses magically morph into strengths, and who raises the ultimate toast at the game that will forever be known as the World’s Largest Cocktail Party.

And let’s see what strain of weirdness this year’s Florida-Georgia game is ultimately remembered for.