It’s not always a good thing to proclaim somebody the captain, or to say it’s their team, but there times where it is. The Gators had many problems last year, and one of them was lack of leadership. Many people said it’s Brantley who should step up as the QB, or Ahmad Black or Carl Moore as the senior, but whoever it was supposed to be didn’t do anything (though Black definitely led a strong secondary by example, and did a great job at it).

Brantley’s no leader. Not yet, anyway. He’s just a game managing QB.

Chris Rainey might be the leader of the offense, but it isn’t offense that leads this team.

No, defense comes first for Will Muschamp. If you lose a game 2-0 because of a sack in the end zone, only then can you blame the offense. Otherwise, Muschamp will pick the defense apart; they had to do something wrong to give up any points at all barring a pick 6 or kick return TD or other miscellaneous TD types.

So defense leads the Gators, the front 7 leads the defense, and Dominique Easley leads the front 7. Now, I’m sure some of you would say Jelani Jenkins, Jon Bostic, Ronald Powell or Sharrif Floyd lead the defense, as you could say that any one of them is the most ferocious.

Guess what? I’d love to be able to have a five way argument like that because it means our front 7 is that good. 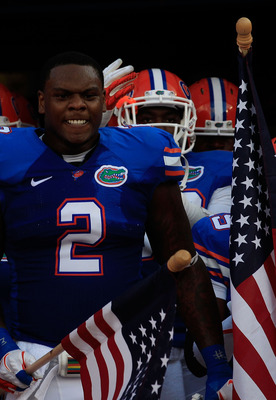 But anyway: why Easley? Isn’t this the guy that wanted a transfer out of the program? Sure, he didn’t want to stick around for Addazio to run the Gators into the ground, but nobody else complained. How is he the leader of this team when just 9 months earlier he wanted a transfer?

Because he’s back, and with him, his swagger.

He was the one doing a little sack dance after a big hit on Bryan Ellis of UAB. He’s in the front of the Gator team when they sing the UF fight song after every game. He’s the one doing the Gator Chomp to the fans while he’s on the bench, exhorting them to get loud.

And he’s one of the best players in the country.

Yep. I just said that, no apologies or takebacks or anything.

His actual on field production isn’t horrible, either.

Through four games, he’s got 8 tackles, compared to just 4 the entire 2010 season. Now, that doesn’t lead the team by any means, but it is by far the biggest improvement from a year ago of anybody on the team. And improvement is the name of the game for Florida- to get better from last year.

Wouldn’t you want a player with a ton of confidence and swagger that epitomizes your team goal to lead you?

2 thoughts on “This Is Dominique Easley’s Team Now”