We continue our film review of Florida’s big win over Towson by going through the tape of the Gators’ defense. If you missed it, here’s the offensive film review.

The first play I’ll show is pretty similar to the first big gain of the day for Towson. Jonathan Greenard produces a pass rush but it seems like Tom Flacco’s feet weren’t recognized on tape by the staff and players or it was and they just ignored it because he plays for Towson and figured they could just out talent and out speed Towson. Jeremiah Moon looks like he’s spying here but he just doesn’t do a great job of it.

This isn’t perfect coverage, but it’s really good coverage and as frustrating as it is, I’m not pulling my hair out over this catch. Kaiir Elam is in a good spot and if Flacco was given nine more throws to this same WR the odds are good the ball is incomplete nine times. QBs have just done a good job of making throws into really tight windows on Florida this year so far, and there’s nothing the Gators can do about it. 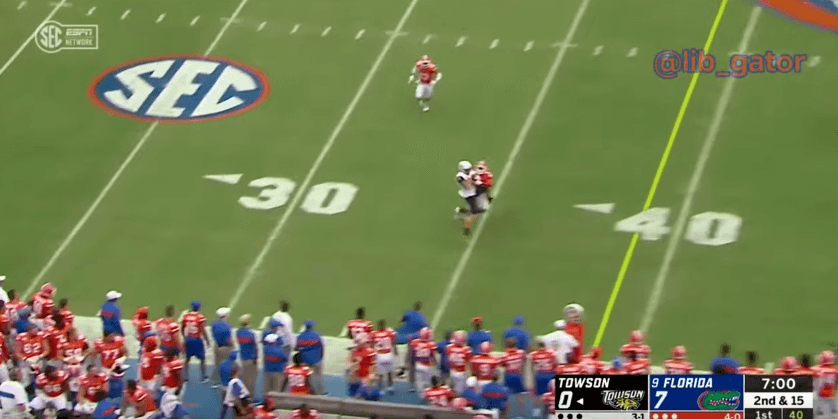 This next play is a failed play from an execution point of view for Towson but it’s a play that worries me in terms of what Auburn does. Auburn heavily utilizes jet sweeps and pre-snap motion to get a defense to show what they’re doing. I don’t know if this is a TD if the ball is thrown earlier and more accurately, but you can see how unprepared the defense is here. Two WRs for two DBs, the closest defender that doesn’t have a blocker is the safety in the middle of the field. Auburn is going to run looks like this a lot and I do not possess much confidence that Florida’s defense can handle it right now. 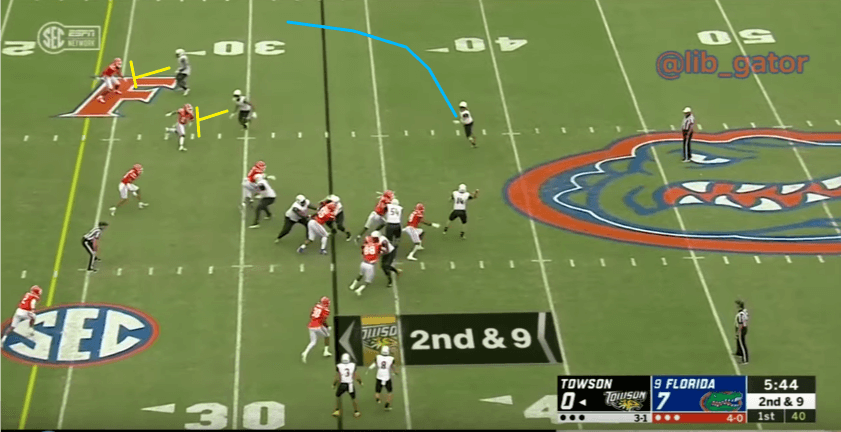 This is the very next play and you get kind of an RPO look. The h-back is going to swing out in the B gap and pull a defender slightly with him, the RB shows screen and the WRs block for it, it pulls two defenders (blue) with him. 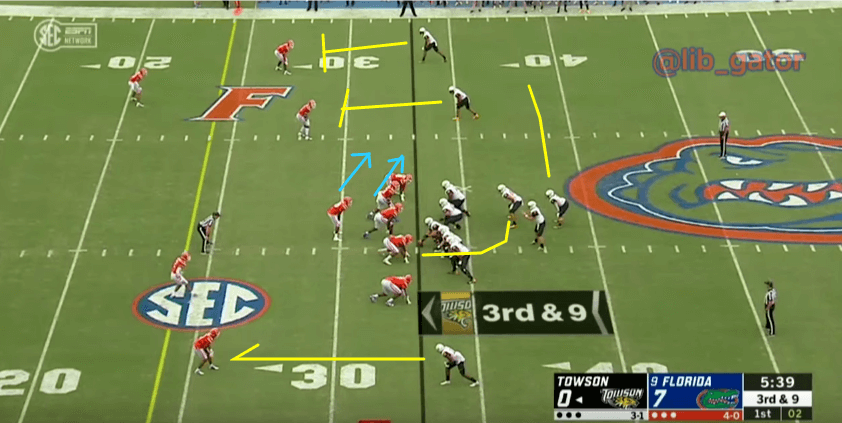 Here is the play in the middle of its development. The two defenders from above are shading the RB and the H-backs movement has opened up the middle of the field. Flacco tucks and runs for a first down here. I can’t help but believe Auburn is really going to gash Florida just by simply moving the RB all over the place pre and post snap.

Trey Dean is struggling badly in coverage from the slot but this is an example of why I find it difficult to discuss benching him. He is extremely physical off the edge when Todd Grantham calls on him to blitz and while Greenard makes the tackle, it’s Dean’s pressure off the edge that blows up the momentum and concept of Towson is attempting to do. Dean has done this in just about every game at least once.

I would love to know if the rest of college football is seeing an issue with tackling or if I’m just noticing this because I’m a Florida fan who does film review of Florida, but this team’s tackling is quite infuriating. The RB gained 4 yards despite this. 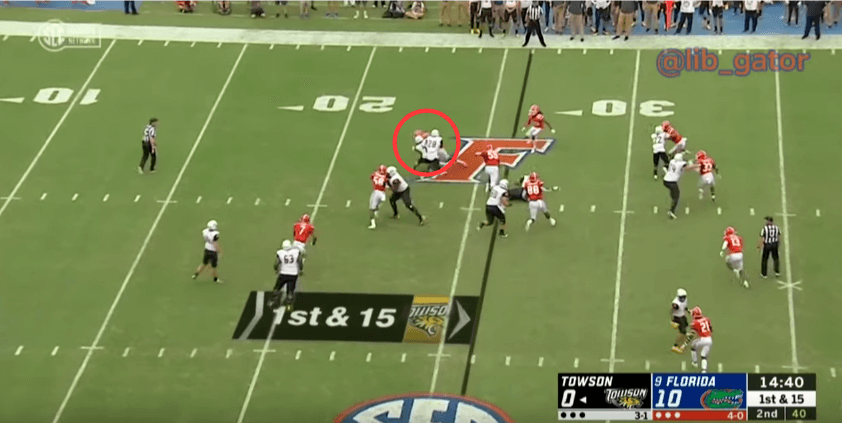 This is at least the fourth time I have recognized Dean giving up a deep out route catch and he wasn’t remotely in a position that allowed him to make a play on the ball. He wasn’t this bad in coverage a year ago and the only thing I can think of for his extreme drop-off as a pure cover corner is that he isn’t comfortable playing out of the slot.

There was another play by Burney prior to this one that I also thought of taking an example from but I liked this one better. The misdirection stuff that Towson was utilizing started to fail a bit more on this drive once Burney was inserted.

In order to save your browser from too many gifs, another strong play off the edge by Dean who gets credited with a sack (half maybe?) here.

3rd down, Grantham brings pressure here off the edge with Dean and Reese adds to it when he realizes the RB is staying into block, turning him into the 6th rusher. 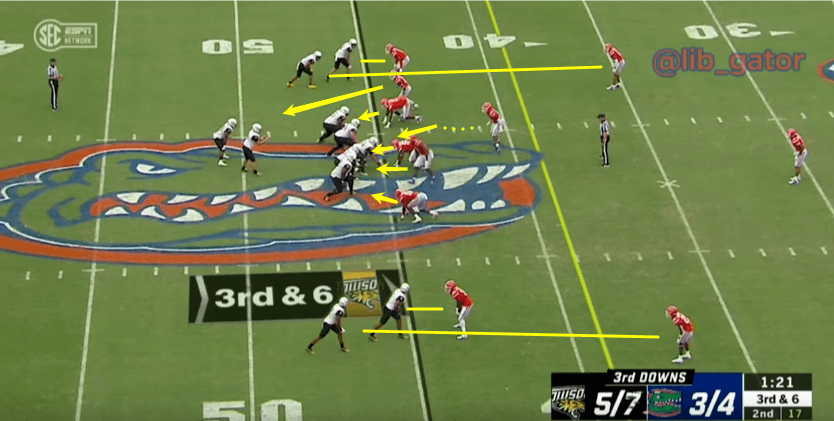 Result is that 4 different defenders get into the backfield. Greenard gets into the backfield first and gets a hand onto Flacco, Campbell splits a double team and misses a sack, Moon twists around as he and Reese clean up.

Another out route catch allowed by Dean. This time he’s in better position than the deeper catch he allowed earlier, but that’s about it. He doesn’t put either hand up to attempt to blind the WRs vision or knock the ball loose. 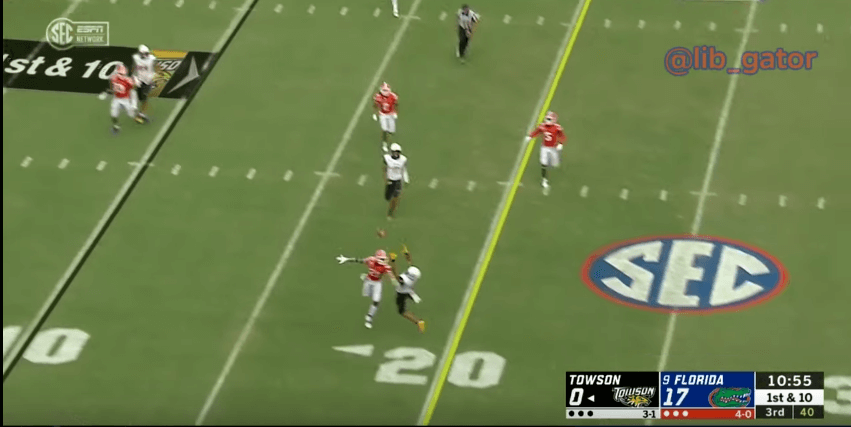 I have noted how much of a fan I am of TJ Slaton numerous times in these reviews and nothing changes here. He’s strong and pretty quick for a guy of his size, he gets right into the backfield here and tips this ball which ends up being picked off. Pass rush from the NT position is very underrated as many people think of a pass rush simply coming from outside pass rushers, but a guy like Slaton has routinely made it difficult for opposing QBs to step into their throws. 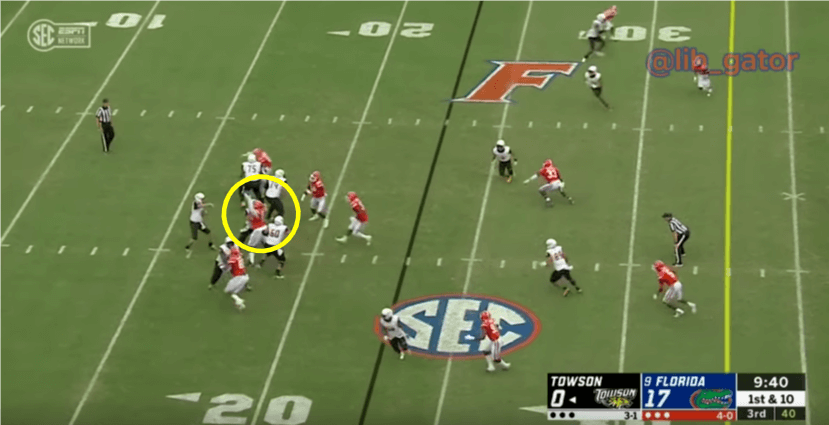 It feels like Florida was more aggressive on 3rd down vs Towson then they were vs. Tennessee. I’m not sure if that is factually correct, I would have to check, but this is another cover 1 blitz on 3rd down that results in a sack.

I would love for someone to educate me on whether corners playing up on the line of scrimmage is entirely a coach’s decision or a corner’s decision. I tend to assume coaches for obvious reasons. But here, the outside corners are up in the faces of the WR and Dean is giving a cushion on 3rd and 1 and it’s an easy conversion. My only guess here is that Dean has been so bad against deep out breaking routes they didn’t want him to get burned on it again; instead, he gives up a slant underneath. 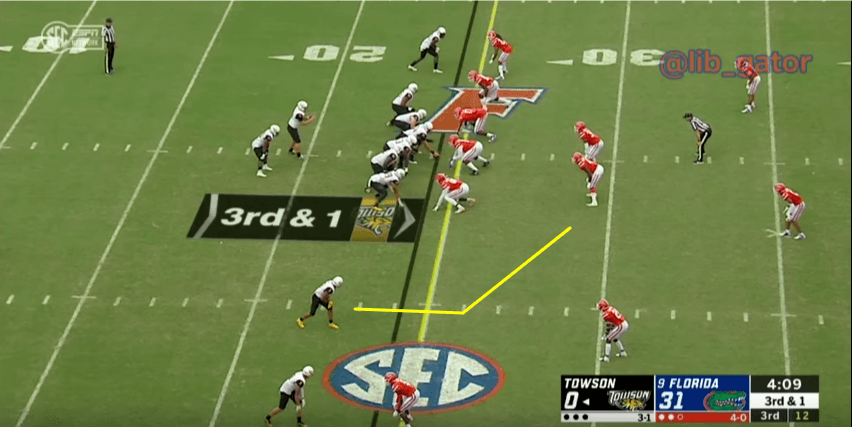 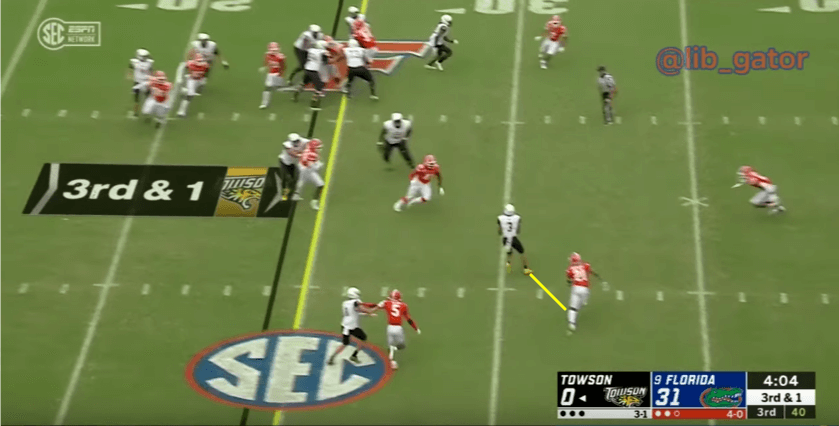 Again, another deep out allowed by Dean. He’s playing 6 yards off the WR at the snap and he’s still no where in position to make a play on the ball. It is becoming blatantly obvious to me that offensive coordinators realize that Dean can’t defend this route at all.

Another sack from the defense on 3rd down, this also was another blitz package from Grantham. Single high safety, man across the board with one of the ends playing a little spy on Flacco. 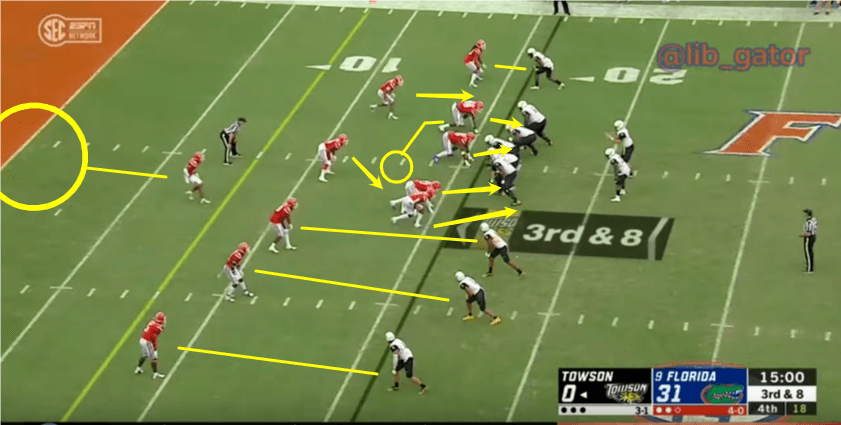 And since I haven’t shown many GIFs of the defensive aggression on 3rd down in this game:

One of the biggest adjustments I noticed out of halftime was less zone, much more cover one looks with someone spying Flacco and I can only guess here without being in the locker room, it looked very much like the defensive line was coached differently in the 2nd half. They weren’t flying up field getting themselves out of position to make plays on Flacco, opening up scrambling holes for him to take off into. This seemed to benefit the run defense as well since the running lanes were more closed off in the 2nd half.

As I noted before, it feels like Grantham was more aggressive on 3rd down in this game and it mostly paid off. It resulted in a number of sacks. And for the most part, a bulk of the sacks in this game had to come off of blitz packages. Greenard is a consistent thread off the edge but without Zuniga on the other size, I have noticed in this game plus the UK (post-Zuniga injury) and UT game that this team doesn’t have a 3rd pass rusher.

Moon was graced with winning the SEC defensive linemen of the week award and I’m not sure why. He was not the best defensive linemen on his own team this week, that would go to Greenard, who regardless of what the official stats say (sacks, in this case), was in the backfield most of the game he was on the field, forcing Flacco up into the pocket for another defensive linemen to take care of. Moon never stuck out to me in a positive light in terms of his pass rushing ability and seemed to just happen to be in the right place late in a play after other linemen would create a pass rush first.

Now onto Trey Dean. I think Dean needs to be moved back outside on passing downs. He can’t handle covering slot WRs. A lot of corners benefit from having the sideline aid them and they can only play that outside corner spot, I think this is what is going on with Dean. But his ability to blitz off corner spot is so effective that I can’t sit here and pretend I want him benched, because I don’t think any other pure corner on the team can do what Dean does there. If Henderson and Wilson are worth the first round draft hype, then I would be up for them showing it by one of them moving into the slot and Dean moving back outside. See if this works. If I can notice how poor Dean is at defending out routes I can assure you that offensive coordinators for far more talented teams than Towson will spot it and they will exploit Deans issue with that route constantly, and when Florida tries to correct the issue with giving him safety help, that offensive coordinator will call a play that takes advantage of the help.

In the end, despite the shutout, this defensive performance left quite a bit to worry about with Auburn coming up. Gus Malzahn utilizes a high amount of pre-snap jet motion to get defenses running all over the place and I’m not currently convinced that Florida, even healthy, has the discipline to handle it. Yes, it is motivating that CJ and Zuniga are back for the passing game, but right now I imagine Auburn targets Dean heavily and when aren’t looking for ways to target Dean, they are going to run the ball a lot.