OK, so Burton has about as much chance of winning the QB job as Furman has of beating Florida.

Yes, Chris Rainey, Frankie Hammond, Deonte Thompson, Omarious Hines and Jeff Demps will be the focal points of the offense.

But perhaps only Kentucky and Georgia will truly have their eyes out for Burton, thanks to Burton putting a match to their defenses last year. Nobody else will really remember him for doing that much damage, except for maybe LSU and Tennessee. Certainly Alabama won’t. Instead, they’ll remember him for swishing a jump shot using Nico Johnson as a hoop.

And that’s just fine and dandy with me.

Laugh at him, guys. Go ahead. Make fun of him. Say he sucks. Please, insult him.

He is our “F” player. For those of you that don’t know what that is, it’s a wide variation of positions. It means Burton could play fullback, wide receiver, tight end, or even halfback at times. It was built around the one decent thing Addazio did in Gainesville- move QB’s around while everybody is set. The problem with Addazio is that he had to do something idiotic to level it out- and that was to throw two yard hitches, just like normal, except these were prettier and more decorated.

But the idea itself was actually useful. Only, instead of moving QB’s, move Burton- and confuse the defense. It’s elementary yet deadly when used right. 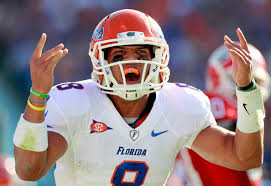 In order to be successful with it, it’s essential to have one of your team’s best overall athletes play the F position. Overall means who has the best combined throwing/running/catching skills. Burton can throw to a limited extent. And he can definitely run and catch, as we saw last season.

So here is why he is our key player. Rainey, Demps, Debose, Brown, Thompson, and of course Brantley will all be watched by opponents, as I said at the top. This means less attention for Burton, and since he is still dangerous it could be fatal to let him slip open. Everybody on the Gators is capable of being a game breaker. But it is imperative that the playmaker that is NOT watched do some damage to open up the door for those that are watched.

It’s a good problem to have, at least for us. For opponents, Florida’s offense will be a nightmare….