Always, that is, except in the case of Urban Meyer. And while Meyer and Muschamp have two extremely different football philosophies, the one thing they have in common is that they stress special teams a lot.

You’ve probably heard the stories about Urban Meyer; the special teams starters got to eat first, got their BCS Championship rings first, first choice of bus or airplane seats, etc. It obviously paid off, especially in 2008, when the Gators won the BCS Championship on the shoulders of Tim Tebow, Percy Harvin, a ferocious defense… and an unbelievable special teams unit.

While Tebow, Harvin and the defense deservedly receiver a lot of the credit, just as much of it should go to the special teams. The numbers are eye-popping: Brandon James returned two punts for touchdowns, the Gators blocked a staggering nine kicks, Jonathan Phillips wasn’t really needed much but hit the clutch field goals when he needed to, and Chas Henry averaged 44 yards per punt with returns factored in.

Special teams need to be special in order to win. Period. The blueprint for championships Muschamp appears to be laying out is: a stifling defense (check), a physical, clock-killing, ball controlling offense (getting there), a smart QB who can manage the game make at least two or three huge plays per game (question mark), winning the turnover battle (which kind of falls into the first two categories, but then again, Florida’s defense was 8th in the nation last year and couldn’t buy a turnover, so maybe not, but anyway, question mark) and dynamic special teams.

The first four of those categories have been convered to death. It’s really gotten to the point where it’s annoying. All we see now on every Gators sports site are gems such as, “Who’s Got The Edge In the QB Battle?”, “Can Pease Get This Offense Going?”, “Can The Gators Finally Force Some Turnovers This Year?” and everybody’s favorite, “Gators’ Defense Is Downright Nasty”.

That’s not a potshot at all those websites in the least. They’re simply doing their jobs- reporting on the most intriguing topics in Gatorland. I would do the exact same thing if I worked for them. But I don’t, and instead, I’m just trying to send a reminder to Gator fans that special teams have carried the Gators in the past, and as recently as last year (without Andre Debose’s kick return TD and Chris Rainey’s blocked punt, Florida almost surely would have lost the Gator Bowl) and should again this year- maybe even more. 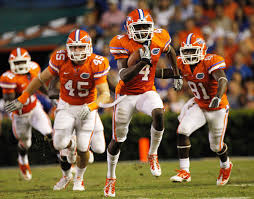 Andre Debose, who in a year and a half returning kicks has taken 3 for touchdowns and has 4 others of 50+ yards, returns. 8 of Florida’s 11 starters in the punt return game return (Chris Rainey, Jaye Howard and Graham Stewart are gone). Florida’s Lou Groza finalist, Caleb Sturgis, returns. Kyle Christy, the rising sophomore punter who averaged 41 yards per punt is back.

There will come a time where the defense is having a bad day, and the offense can’t save them alone, or vice versa. One unit at some point this season is going to need help. That’s a given, especially with a young team and even more so in the SEC. This is when the Gators will need their special teams to help them. And if a game comes down to special teams, I like Florida’s chances.