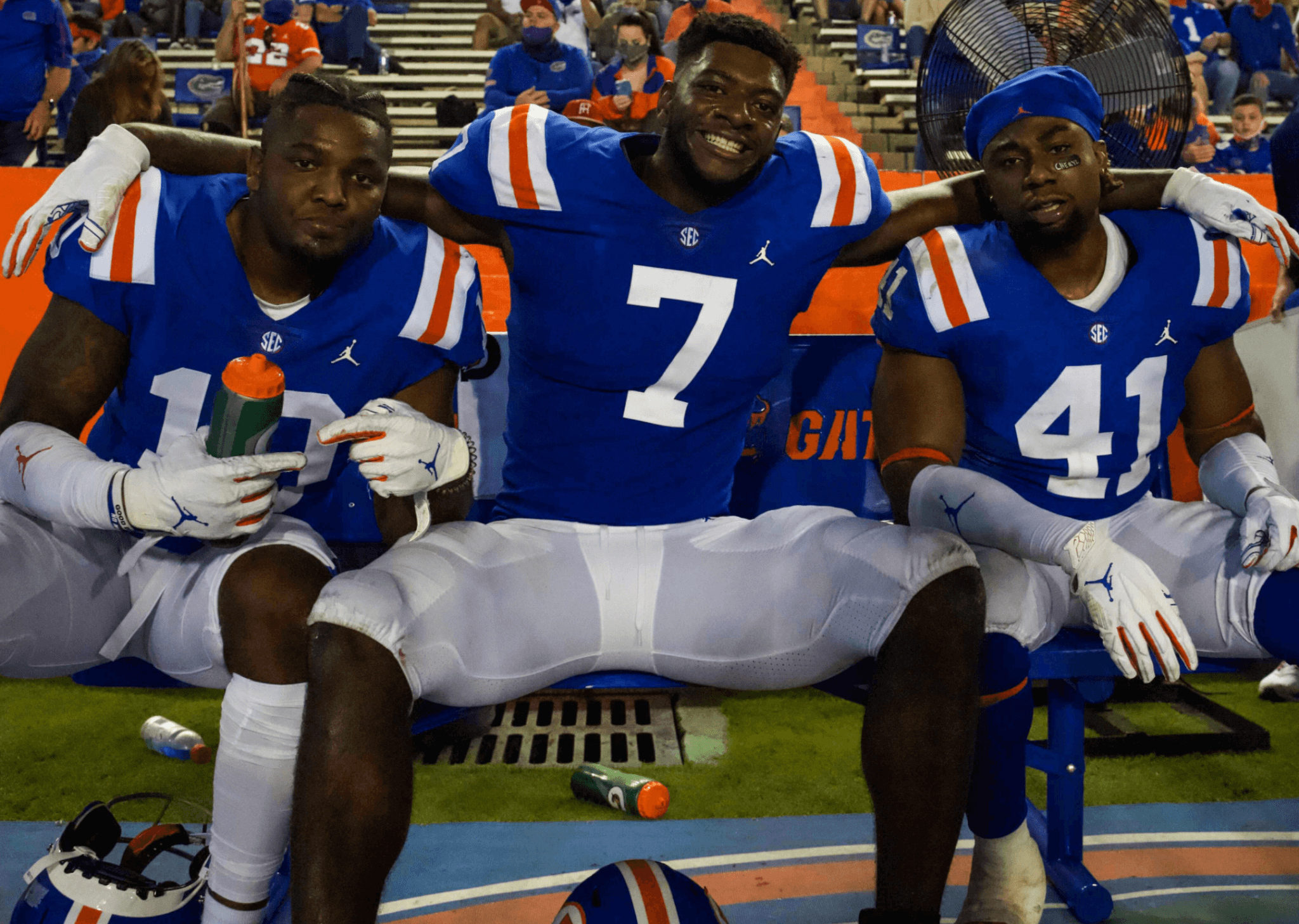 A few days later, with the game film from Florida’s 41-17 beatdown of Missouri having been reviewed twice, it’s time to hand out some helmet stickers and declare the nominees for the Play of the Game.

Note: you can watch the complete game here; you can listen to our thoughts on the game here.

Who earned the honors this week?

1st quarter 13:00: Malik Davis for his 30 yard catch and run. Maybe Florida does have a guy who can match LaMical Perine’s reliability catching passes out of the backfield. Cap tip to Davis for bouncing back from his game-losing fumble three weeks ago with a big play to start the night against Mizzou, weaving his way down the sidelines for a huge gain.

1st quarter 12:30: Kyle Trask and Kyle Pitts for their 19 yard hookup. While technically not a chunk play- I require a play to gain 20 yards or more to be considered a chunk play- the pair of Kyles each gets a sticker for their timing here. Trask was nearly sacked and got this ball away with heavy pressure in his face, and Pitts just did what he did best and got himself open to reel it in.

1st quarter 9:12: Chris Howard for his 28 yard field goal. Welcome to the big time, Chris Howard! Stepping in for the inactive Evan McPherson, the backup kicker drilled his first ever collegiate field goal attempt right between the bars to give Florida an early 3-0 lead.

1st quarter 3:45: Dameon Pierce for his 34 yard catch and run. Copy and paste the synopsis of Davis’s catch and run earlier here, only swap out the names and remove the part about the game losing fumble against A&M. And Florida officially has two threats who can catch the ball out of the backfield!

1st quarter 2:15: Chris Howard X2 for his 32 yard field goal. Whatever happens with McPherson, at least we know that we have a capable backup. Good for you, Chris!

2nd quarter 12:58: NayQuan Wright for his forced fumble. I know the pick six Trask threw was ugly and not something that’s fun to rewatch a billion times, but watch what Wright (#6) does on the play. Whereas many Florida players seemed to be conceding the pick six, Wright stays with it all the way sheds a block, gets to returner Jarvis Ware and actually punches the ball free near the goal line, forcing a moment of panic for Ware before he quickly picks it back out of the air. But I love the hustle and never say die attitude, and Wright gets a helmet sticker for that.

2nd quarter 5:11: Brenton Cox for his major TFL. Leave it to Missouri to pick up a first down on a penalty and then throw themselves right back out of the drive with an ill-fated reverse play. But Cox deserves praise for this one too, first for sniffing it out and then for finishing the play by tackling Keke Chism for a 16 yard loss.

2nd quarter 4:30: Andrew Chatfield, Amari Burney and Zach Carter for their TFL. The Tigers’ second enormous negative play in a row was due to a trio of players. First, Chatfield redirected Larry Rountree backwards. Then, Burney grabbed hold of him and shut down his momentum. And Zach Carter finished it off. Helmet stickers for all three of you.

2nd quarter 2:38: Kyle Trask X3 and Jacob Copeland for their 36 yard connection; Jacob Copeland X2 for his broken tackles (Play of the Game nominee A). Rarely did my high school football team (and therefore myself in this segment, as I use their rules to hand them out) give out multiple helmet stickers on the same play. But Copeland freed himself up and made the catch for the first one, and then dragged five Missouri players another dozen yards down the field for the second one. And Trask got it to him, so he gets one as well.

2nd quarter 1:52: Kadarius Toney for his 18 yard catch and run TD (Play of the Game nominee B). What should have been a modest gain on a quick toss in the flat became a touchdown because Toney is a video game player playing in real life. Absolutely unbelievable electricity here from Toney, which gave Florida the lead back.

2nd quarter 1:20: Zach Carter X2 for his penetration of the line; Brenton Cox X2 for his fumble recovery. Heads up play by Cox to see the ball on the turf and fall on it, which is why he picks up his second helmet sticker. But this play doesn’t happen without Carter, who blew through his gap and forced a panic-stricken Connor Bazelak and Tyler Badie to muff the exchange that led to the ball hitting the turf in the first place.

2nd quarter 1:16: Kyle Trask X4 and Kadarius Toney X2 for their 30 yard touchdown hookup . (Play of the Game nominee C). Mullen is a big believer in taking a shot right after forcing a turnover to capitalize on the momentum, and these two guys on each end of the shot get a helmet sticker for executing it and making it 20-7 Florida.

2nd quarter 1:05: Jaydon Hill for his PBU. Mizzou promptly tried to grab the momentum right back with a shot of its own, and they almost hit it. But Hill dislodged the ball at the last second from receiver Keke Chism to render it a harmless incomplete pass.

3rd quarter 14:05: Kyle Trask X5 for his 26 yard run. Nobody’s going to mistake Trask for Tim Tebow, but the Gators’ current QB did unwittingly strike a familiar pose on this run, so bonus points for that.

3rd quarter 10:45: Kadarius Toney X3 for his 16 yard touchdown run (Play of the Game nominee D). Goodnight, Missouri. Toney’s completion of a hat trick demonstrated yet another example of his incredible athleticism, tiptoeing down the sideline before spinning into the end zone to blow the game wide open.

3rd quarter 9:34: Kyree Campbell for his TFL. Welcome back, Mr. Campbell! Florida didn’t need you to create this particular negative play- the game was already well in hand- but they will need you to create more like it in the future, and it’s great to see that you’re able to do it and make splitting that B-gap look so easy. Here’s your first helmet sticker of the year.

3rd quarter 8:20: TJ Slaton for his sack. No Zach Carter, no problem. At least not last week. The Gators proved more than able to generate negative plays against Missouri even without their junior leader on the defensive line, first with Campbell and then with Slaton slamming the ball carrier down for losses on back to back drives.

3rd quarter 6:57: Jeremiah Moon for his sack. This was the second time that the Gators were able to force multiple negative plays on the same drive- a welcome sight heading into Jacksonville. This time, it was the fifth year senior Moon doing the honors, and he of course gets a pretty imaginary decal to add to his helmet.

3rd quarter :27: Kyle Trask X6 and Justin Shorter for their 1 yard touchdown connection. Ordinarily, I don’t give out helmet stickers to the QB for a little toss in the flat- he’s got to throw the ball deep down the field to earn it- but Trask earned this one with a pretty believable play-fake, suckering in the defense and allowing him to find Shorter for his first touchdown as a Gator.

4th quarter 14:27: Khris Bogle, Kyree Campbell X2, James Houston IV and Brenton Cox X3 for their TFL. All four players sliced through the line and forced their way into the backfield, walling off anywhere for Tyler Badie to go. Thus, all four players get a helmet sticker for this one.

4th quarter 13:55: Patrick Moorer for his PBU. Few had heard of Moorer before Saturday, but the junior was forced into duty thanks to a wave of inactive starters in the secondary and made the most of it, playing this ball well and slapping the pass down intended for Keke Chism.

4th quarter 8:20: Kyle Trask X7 and Jacob Copeland X3 for their 31 yard connection. Up 34-10 and still throwing bombs, Trask fired a dagger down the right-middle fifth of the field for Copeland, who hauled it in for an easy 31 yard gain.

4th quarter 7:57: Kyle Trask X8 and Trevon Grimes for their 18 yard touchdown connection. Just for good measure, Trask flung one to a wide open Grimes on the curl route, who caught the ball, cut upfield and did the rest to make it 41-10. Nighty night, Missouri.

One thought on “Florida 41, Missouri 17: Helmet stickers and plays of the game”