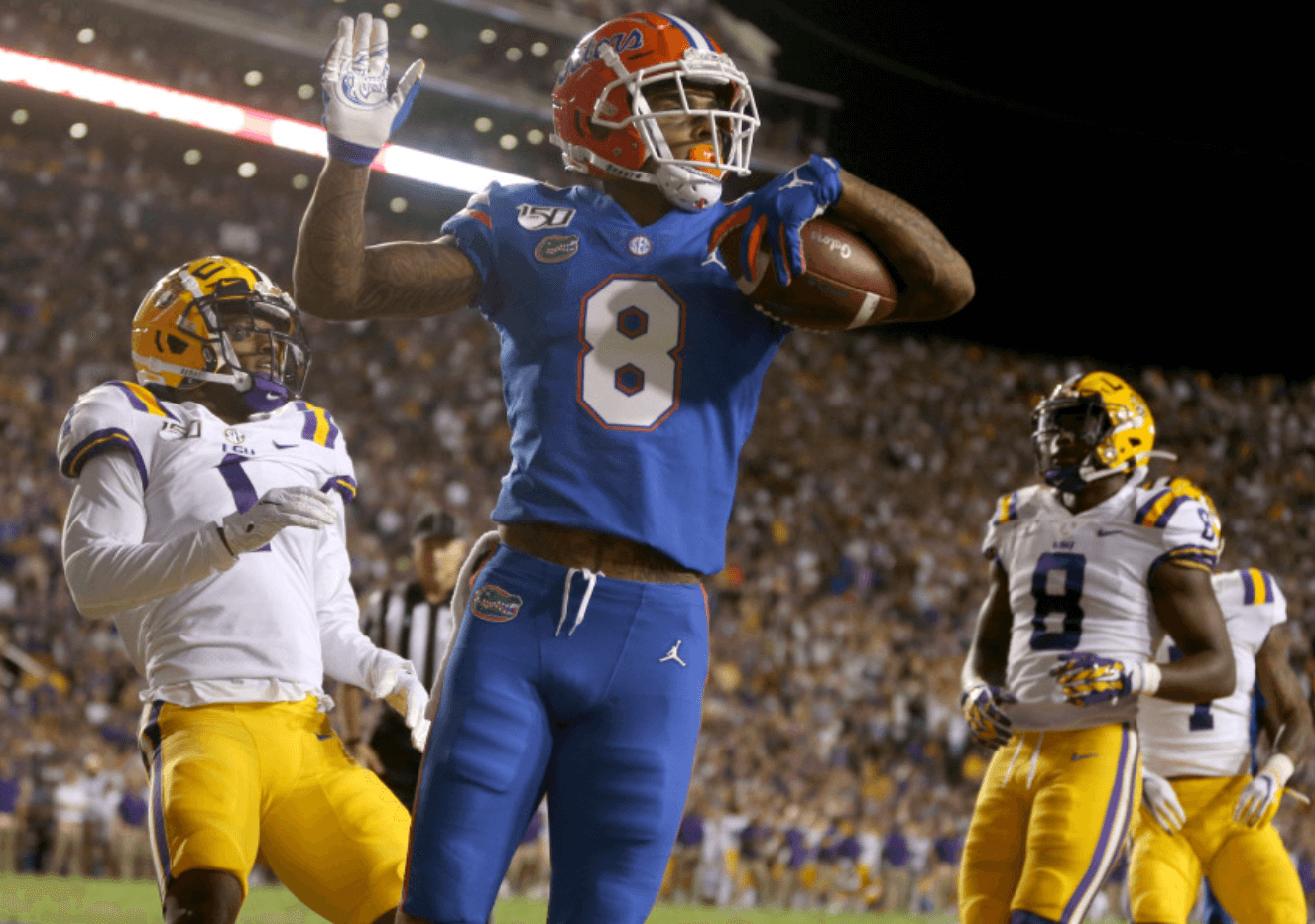 Having previously broken down Florida’s quarterbacks and running backs, our position preview segment moves along today with a look at Florida’s receivers. It’s a unit that lost four of its top playmakers from 2019 (Van Jefferson, Freddie Swain, Josh Hammond and Tyrie Cleveland), so what will they look like this year?

The only way that Grimes would not have appeared here would have been if he’d opted out of the 2020 season. Which, as he emphatically stated multiple times, he is not doing. Grimes is the unquestioned captain of the group, having caught 33 passes for 491 yards and three touchdowns last year. He developed some real chemistry with Kyle Trask last year, even with so many guys ahead of him on the depth chart, and is now the Gators’ clear #1 target through the air. The quickness, the crisp route-running, the ball skills, and the agility he brings to the table makes him quite a terror for opponents to deal with at the X receiver position. Don’t be surprised if Grimes finds himself on the Biletnikoff Award ballots as the season nears its conclusion.

The only thing holding Toney back is his vision. He has this habit of being too impatient to wait for his blocks to get set up and crashing into a wall. But that can only hold you back so far when you’re as naturally explosive as Toney is. Simply put, he’s the most electric playmaker in the country and now he’s seemingly got the slot receiver position all to himself. Look for him to finally put it all together in 2020 and turn “flashing potential” into “realizing his potential on a consistent basis.”

Copeland appeared to have finally broken out against South Carolina, and remained a piece of the offense worth consideration for opposing teams throughout the course of the season. But now, after Florida loses four top receivers ahead of him on the depth chart, Copeland is poised to really take off. He’s quickly growing into a more dependable pass-catcher as opposed to just a talented kid with potential this offseason, and with his sub 4.45 40 yard dash and quick feet, he’s not someone to count out. He’ll need to cut out the drops, but if he does- look out. He’s a fairly safe bet to start at the Z receiver spot, and merely being a starter feels like his floor this year.

Similar to Grimes, the only way Shorter would not have been given a featured spot in this offense is if the NCAA ruled that he could not play in 2020. There’s a reason that Shorter was once the top-rated wideout in his recruiting class, and now he’s going to get to display that reason for the world to see. He’s another blazer (4.5 in the 40 yard dash) with exceptional ball skills, and though he lacks the familiarity in the Gators’ system that Grimes has, he’s simply too good to not give extended playing time to. The more he works with Nick Savage, the more frustrating he becomes for opponents. He may still have a bit of a learning curve to navigate, but I’d be shocked if he’s not a top three option for Trask through the air by the time the Cocktail Party rolls around.

Others to watch for: Rick Wells, Xzavier Henderson, Trent Whittemore, Jaquavion Fraziars (and Jordan Pouncey, if he ever gets his eligibility waiver)

Wells has more than paid his dues and can accurately be labeled as a season veteran despite the lack of production. “Baby Hendo,” as he’s sometimes referred to, brings a world of upside and will be hard to keep on the bench for too long. Whittemore has shown an impressive ability to create separation during offseason workouts. And Fraziars isn’t wise to just forget about, either. These guys may not be featured parts of the offense, but all four seem ready to carve out a distinct niche within the offense even in the event that everyone above them stays healthy. In the event that the injury bug, or COVID-19, infiltrates the program, Billy Gonzales has to feel pretty damned good about the guys he’d slide up the depth chart. Oh, and that’s all without saying a word about Jordan Pouncey, the Texas transfer who’s an instant plug-and-play piece… if he’s healthy and eligible to play in 2020. (The ball’s in your court there, NCAA.)

Grimes is easily a top-flight receiver, but the unknown behind him is at least reason to pause before boasting about this group. For example, is this the year where Toney puts it all together and becomes a more complete receiver? Copeland showed promise in limited action last year; is he indeed ready to produce proportionately when targeted more? And can Shorter shed the demons that hampered him at Penn State and remind us all of why he was so highly recruited in the first place? With the job that Billy Gonzales has done so far, I have to think the answer to all of the above- or at least two of them- is yes. But before I see that, the questions do have to be asked.

Don’t let the heavy personnel losses fool you. Though perhaps the Gators’ wide receivers will take a slight step back as a unit in 2020, there are still plenty of reasons to regard it as a strength of this football team. The guys at the top- Grimes, Toney, Copeland and Shorter- are a bit less collectively proven than the top four a year ago but potentially boast an even higher collective ceiling. We already know what Grimes can do; now it’s just a matter of if the other guys in that wide receiver room can step into larger roles and produce accordingly. And this pass-catching corps still has some impressive depth behind its projected top guys. Put it this way: if Florida’s 2020 season becomes a disappointment, the wide receiver group won’t be the reason why.