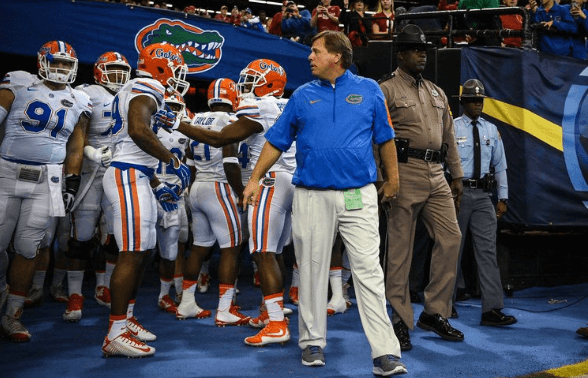 Welcome to May. It’s getting warm outside, the NBA Playoffs are starting to get interesting, college baseball is nearing its always exciting conclusion… and we’re one month closer to college football season, of course.

May is typically when I begin to release my analysis-heavy, game by game preview/breakdown pieces of each of the Gators’ opponents. However, those pieces require watching film, which being three weeks away from graduating from college doesn’t really allow me to do. Hopefully, they will begin to run next week. Until then, here is my official, pre-film-watching, post spring, game by game projection for the Gators’ 2016 football season.

I hope you kill many possibly productive hours debating this.

First game jitters and breaking in a new quarterback may provide some nervous moments. But UMass is no match for the nasty street fighter of a program that Jim McElwain is building. Florida shakes off a slow start and cruises. Florida 42, UMass 3

If Kentucky had Patrick Towles, I’d be a little more nervous about this game. But Towles transferred to Boston College, and the Wildcats have to replace seven starters on defense. Meanwhile, Luke Del Rio is more comfortable in his second game as a starter, and his receivers will step up and make some plays for him. Kentucky may put up more of a fight than UMass, but the Gators will also play better, so the result will be about the same in the Gators’ 30th straight win over the Cats. Florida 38, Kentucky 7

Here comes the fun. UNT is an absolute mess on both sides of the ball, and they’re going to have to face a Gator team that’s 2-0, getting better every week and brimming with confidence. I hope everybody likes the color green, because you’re bound to see plenty of it in every Gator highlight film that’s made after this season. Florida 63, North Texas 6

Going into Knoxville will be tough. Stopping Josh Dobbs will be even tougher. Florida does have one advantage, though: the Vols seem to take some sort of masochistic delight in beating themselves whenever they play the Gators. The calm, cool and collected demeanor of Luke Del Rio will be the difference, as he guides Florida down the field for a game winner by Eddy Pineiro. Make it 12 in a row over Tennessee. Florida 17, Tennessee 16

After two straight losing seasons, it’s safe to say that Vanderbilt is on the decline. That’s not to say winning on the road is ever easy, and no team can be overlooked- which is a real possibility after an emotional win in Knoxville the week before- after the near disaster a year ago against these same Commodores. But while Vandy has a decent defense, Derek Mason’s club simply doesn’t have the firepower to pull this off. Florida 24, Vanderbilt 10

Florida’s vaunted secondary was torched last year against a so-so LSU passing attack, and you can bet they’ll be ready for this game in the Swamp. But the Tigers still have the best player on the field in Leonard Fournette, and the Gators haven’t stopped him since he arrived in 2014. The depth of Florida’s linebacker corps will be tested, and eventually, Fournette will wear the Gators’ defense down and out in their first loss of the year. LSU 31, Florida 20

Missouri’s undergoing some massive changes right now, the kind that likely won’t be fixed by the time they have to go on the road and face a team that just took its first SEC home loss in two years. Plus, you can bet the Gators remember what happened the last time Mizzou came to the Swamp. Happy Homecoming, Gator alumni. You’ll have a blast at this one. Florida 49, Missouri 17

Nick Chubb won’t be easy to stop if he’s able to play in this game, and neither will Sony Michel in case he can’t. But beyond their rushing game, Georgia is a mess. The Bulldogs return just two starters in their front seven, and both offensive tackles need to be replaced. Florida’s offensive line will get better each week, and they’ll enjoy their best performance yet against the Dawgs. Expect yet another dominant rushing performance in Jacksonville, which will guide Florida to their third straight over Georgia. Florida 37, Georgia 13

Trap. Game. Florida’s the better football team on paper, but they’re still not immune to taking losses like this against decent teams on the road one week after beating their archrival. Arkansas also has a penchant for stepping up in November, which does nothing to assuage my fears of this game. Luke Del Rio will play fine, but he’ll be outshined by Austin Allen on this night. Arkansas pulls the upset, and some drunken Razorback fan will try to claim it’s in retaliation for stealing Joseph Putu on Signing Day. Arkansas 26, Florida 21

Perry Orth should send out an SOS now, while there’s still time. It’s no secret that the Gators will be hunting for gore in this game, and against a team that’s as depleted as South Carolina is, they’ll get it. The Gamecocks have no offensive firepower, no defensive playmakers, and no real hope this season. Will Muschamp may turn the program around by 2017, but he’s about to take the most lopsided loss in the Swamp in a coaching career filled with them. Florida 34, South Carolina 3

Who the hell scheduled this game? This is a team that was so bad last year it qualified for dead last in the Big South. That, for those of you who don’t know, is one of the weaker FCS conferences. Presbyterian promises to be little better this year, and so what should ensue is a bloodbath of epic proportions. Points aplenty for the Gators in their annual pre-FSU tune-up game. Florida 80, Presbyterian 3

Jim McElwain’s first venture into Tallahassee should be an interesting one. FSU returns a plethora of starters from last year’s team that looked good for most of the season, but suspiciously average in their Peach Bowl loss to Houston. And yet the same could read as a synopsis of Florida’s 2016 team. The Gators have a legitimate threat in Antonio Callaway, but FSU is better equipped to stop him than Florida is to stop the always dangerous Dalvin Cook. Noles salt this one away late. FSU 30, Florida 20

Replacing Jake Coker, Derrick Henry, Kenyan Drake, Reggie Ragland, Jarran Reed and A’Shawn Robinson all at once won’t be easy, to say the least. But Alabama still has a bona fide star wide receiver in Calvin Ridley, and plenty of talent left on defense. The Gators will give the Tide their money’s worth for the second straight year on this stage, but a killer turnover late will doom them. Alabama 24, Florida 13

Oregon’s up-tempo offense is quite a chore to stop. Dakota Prukop had plenty of success running a similar offense at Montana State, and now he’s become the favorite to win the Ducks’ QB job. A so-so defense will keep them from the Pac-12 title hunt, though, so they’ll be relegated to the Cotton Bowl against a Florida team that’s got a month to prepare for their high powered attack. Gators win a fun one. Florida 38, Oregon 27