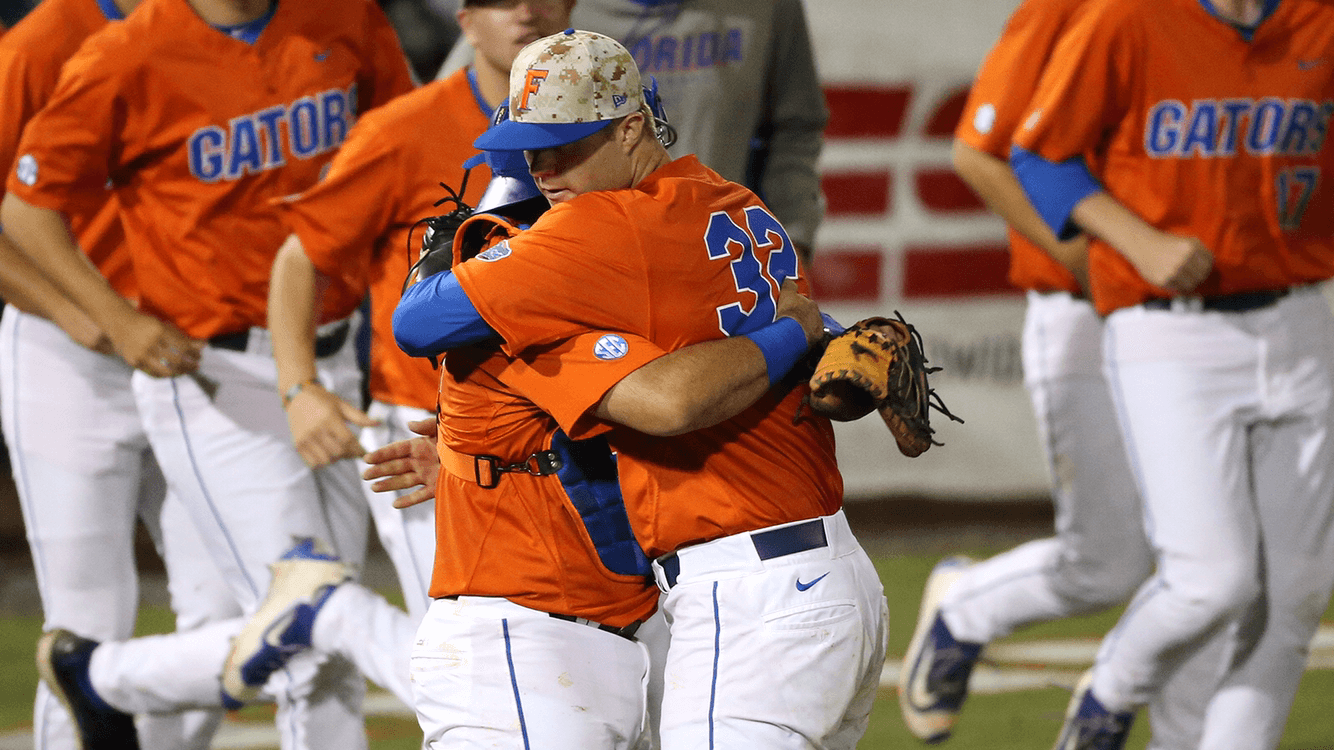 You can add baseball to the list of sports in which the Gators own Georgia.

Florida has beaten Georgia 20 of the last 26 times in football, 19 of the last 23 in basketball and 24 of the last 31 games in baseball, and have claimed the season sweep by beating the Dawgs in all three this year.

And like their counterparts in football and basketball, the Gators’ baseball team dispatched the Doggies off to the pound with tremendous defense, or more specifically, pitching and defense.

Georgia actually stole game one on Thursday, despite a tremendous outing from AJ Puk on the mound. Puk gave up just three hits and one run in 6.2 innings of work, but UGA’s Robert Tyler matched his dazzling night with one of his own, so the game went into extras… where the Dawgs’ Nick King won it in the 12th. Not fun. Not fun at all.

But let’s move on to Friday, where the exceptional pitching continues and the fun began. Let’s start with Buddy Reed stealing home. I know how awesome we all know that was, so let’s show it again:

Reed stealing home was the cap to quite an opening salvo for the Gators, who promptly loaded the bases in the first inning. Reed and Jonathan India plated three on back to back RBI singles, after which Reed took third before, and I repeat again because of the extent of its awesome, he stole home.

More importantly, though, was that Georgia never even got on the board, and that was because of a record breaking night by Florida ace Logan Shore. In a roundabout way, Shore was perfect: 27 up, 27 down. He did give up a couple of hits, but both were erased on double plays. And above all else, he just looked good, flustering UGA hitters with his sinker, fastball and breaking ball alike.

If you’re after a way to officially categorize his night, try this: is a complete game shutout, and his 13th consecutive win- which just so happens to be a new school record- in a game the Gators won handily, 6-0.

Florida took a similar route in winning the rubber match. Peter Alonso clobbered a two run homer in the first and the Gators held on from there thanks to great pitching from Alex Faedo, Kirby Snead, Dane Dunning and Shaun Anderson. Faedo went 5.2 innings of shutout ball before being replaced, and his relievers did fine until Georgia launched a last ditch threat against Dunning in the ninth. But Anderson came in and slammed the door shut with back to back strikeouts, just like that. End of threat. End of game. End of series.

While owning Georgia is fun, though, it’s far from “take your foot off the pedal” time. Florida’s got a critical series with South Carolina this weekend that could very well decide the SEC on its own, and even though that in itself has no correlation to the ultimate prize- a national title- it could go a long way in establishing confidence and momentum in a team that tends to have a surplus of both at times but little of either at others. And especially given the impending big stages, it’s never a bad thing to have too much confidence.