If you’re studying or ever have studied human behavior, then you know what shaping is. Well, if you don’t, here’s the perfect example:

In 2008, the Gator baseball team, in its first year under Kevin O’Sullivan, made the NCAA tournament, but was promptly eliminated in the FSU Regional.

In 2009, Sulley’s second year, the Gators hosted their own region, and won it, but were knocked out in their own Super Regional by Southern Miss.

In 2010, Sulley’s third year, the Gators won their own region, won their own Super Regional over Miami (thanks to a bunch of errors) to advance to the College World Series but were immediately bounced by UCLA and FSU.

In 2011, Sulley’s fourth year, the Gators won their own regional, beat Mississippi State in their own Super Regional, and then beat Texas and Vanderbilt twice in the College World Series, but their bats went cold against South Carolina in the national championship series and lost.

That’s shaping- take a step closer each year and praise the improvement each time. Now, though, it’s time for the Gators to take that final step and win it all. The preseason  #1 Gators have really slumped after starting out 20-1. They still have a good chance to win the SEC, and they will get home field until the College World Series unless they really collapse down the stretch, but there’s no excuse for the lack of run support for their pitchers. 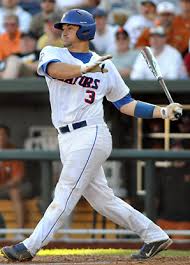 At one point, this Gator lineup was by far the most feared in the nation, hands down. Nolan Fontana has an excellent on base percentage to lead off, and the Gators have perhaps the biggest 3-4 punch- Mike Zunino and Preston Tucker. The rest of the lineup is pretty solid too, with Vickash Ramjit, Justin Shafer, Casey Turgeon and Brian Johnson all power threats at the plate.

But for some reason, the Gators now can’t seem to buy a run. This awesome lineup has not scored more than five runs in three weeks- and that was against Bethune Cookman. OK, the Gators have played some good teams- Mississippi State, Arkansas and Kentucky are all probably NCAA tourney bound- but the Gators usually break out in at least one game in a series. Or, as I should say, they used to.

It’s fair to say the Gators peaked at the wrong time- back in March- but that doesn’t mean they can’t peak again. Teams change during a season, and if the Gators changed for the worse, they can easily change for the better. All it takes is one guy getting really hot at the plate and the rest very well may follow suit.

The good news is, the Gators’ pitching has been top notch pretty much all season, and pitching and defense win championships. All you need is more runs than the other guy, and if the Gators’ suddenly frozen bats heat up for a string of runs in one big inning, you have to like the Gators’ chances in that game.

The Gators have a tune-up game against Samford tomorrow before wrapping up their season at Auburn this Thursday, Friday and Saturday. The SEC tournament is next week, followed by the NCAA Tournament. Basically, the Gators’ bats better wake up soon if they want to make this season successful and do something that Florida fans have come to expect from pretty much all their sports teams- win a national championship.

These Gators have the bitter taste of past failures stuck in their mouths, no doubt. Preston Tucker made the killing error in the loss to Southern Miss three years ago. Mike Zunino lined into the game ending double play against FSU two years ago. And the entire lineup was silenced by South Carolina last year.

Let’s see if those memories really make the Gators into a championship team.