I’m sure by now, lots of things about Will Muschamp have surfaced into Gator fans’ heads. He’s friends with FSU coach Jimbo Fisher, Tennessee coach Derek Dooley, seems to be friendly with UGA coach Mark Richt, and of course, Alabama head coach Nick Saban. He grew up in Gainesville but played for the Georgia Bulldogs. He’s an old SEC veteran- played for Georgia and worked for Auburn and LSU.

Well, he had a man’s determination combined with a child’s temper.

Take the time he was in the Dixie baseball league, and hit a pair of bombs in one game, yet his team still needed one more out to win the game, and was out of pitchers. Muschamp boldly went up to his coach and yelled the following: “GIVE ME THE BALL!!! I’LL GET HIM!!!”

He sure did. Got the last out and won the game for his team.

Now, did Muschamp ever pitch before in his life? Nope, not even in pick up games where everybody screws around trying to do things they never would in a game.

Maybe not quite as gutsy as the time in high school where a big, stupid redneck kid (sorry for the blatant stereotype, but that’s how they’ve all described him) mouthed off to a substitute chemistry teacher, and when the sub left the room, Muschamp went right up to him, shoved him into a wall, punched him, and snarled, “What did you say?” 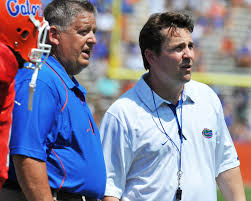 He’s always been comfortable being involved with bigger kids. Older kids, more specifically. Like football players. In a real high school game. As an eighth grader playing against mostly juniors and seniors of his school’s archrival. And most importantly, picking off three passes for 120 return yards as a deep safety.

But there’s another story of a different high school game that really epitomizes Muschamp’s life. Playing left field for his school’s baseball team, Muschamp ran in for a fly ball and the shortstop collided with him. His leg was crushed and his athletic career appeared to be over.

Big deal. Professional magicians make thing appear and then disappear. One thing that did appear to Will Muschamp’s life following the incident was a 17 inch steel rod, which was inserted into his leg. And at the same time, recruiting letters disappeared as well.

But what really defines Muschamp as a person is his competitiveness. And when his coach called him in the hospital, the first thing he said to his coach was, “Coach, I caught the ball. I caught it!!! I really did!!!” The end of the letters in the mail, including from his beloved Gators, wasn’t the end of anything at all; just the start of a Hollywood worthy story.

Muschamp wound up playing college football anyway, as a walk on for Georgia (yuck) and later signed for a scholarship after proving that he was indeed OK. He played all four years for UGA (including four straight losses to Florida, I’m happy to add) despite his serious injury. 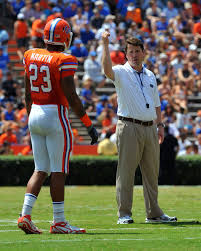 Now fast forward a few years. After being a GA for Auburn with future colleagues Jimbo Fisher and Rick Trickett, Muschamp eventually wound up at Valdosta State (Georgia). After his first year, Muschamp drove to Atlanta to visit some family, and LSU was prepping to face Georgia Tech in the 2000 Chick Fil A Bowl. Fisher recommended LSU coach Nick Saban to give Muschamp the linebacker coach job, which was vacant since the departure of Sal Sunseri.

Fisher introduced Muschamp to Saban, and then later that night called him up following a hard day’s work of working on Saban.

“Would you be interested in coaching for LSU?” Fisher asked Muschamp. “Of course,” Muschamp replied. And within 24 hours, Muschamp and Saban had shaken hands, and Muschamp was donning purple and geauxld.

Muschamp and Fisher soon became co-coordinators… and you know all the rest, up to and including the co-ownership of a beach house.

So, we know Will Muschamp now. Or don’t we?

There’s one big piece of info that’s yet to be discovered… but can be guessed at… what’s he like as the head coach at Florida?

Here’s a hint. He keeps that steel rod in a glass case in his office. Why? To prove to anybody that adversity is able to be overcome. It’s not easy. But it can be done.

Let’s end on a lighter note.

If you need any proof, but can’t make it down to Gainesville, here’s an even better piece of proof. He was on his way to losing his immortal soul to hell when he played with Georgia. Somehow, he overcame that, and righted his ship and became a good guy again, and a “Florida guy”.