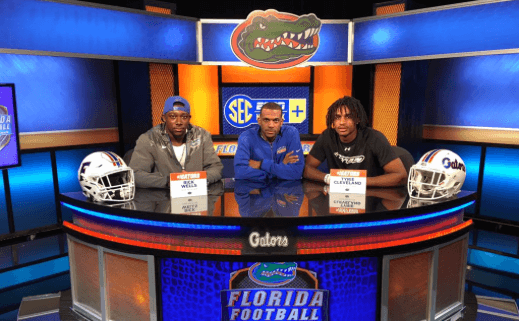 Jim McElwain’s first full recruiting class is shaping up to be a good one. The next few days will determine if it’s a great one.

The Gators hosted several big time recruits (official visits) this past Friday/Saturday in the last weekend they could do so. Many of them have already committed to Florida, including Quincy Lenton, Rick Wells, LaMical Perine and Tony Nelson. But more important than reaffirming what the committed kids already knew- that Gainesville is their home- was getting to be the last school in the ears of two highly touted recruits who still have decisions to make.

Five star cornerback Kristian Fulton was one of them. It’s never easy to pull Louisiana kids away from the call of nearby Death Valley and LSU, but that’s what Florida is trying to do. The Gators have already locked up one top flight corner in this class in Chauncey Gardner, and he may be the X-factor in Fulton’s recruitment. The two have become very close with each other, and the prospect of having his best bud be someone who not only plays his position, but is similarly gifted at it as he is is very appealing to him. LSU obviously won’t give up on him, but Florida appears to be in really good shape with him with Signing Day less than 48 hours away.

The other big time prospect on campus this weekend was four star wide receiver Tyrie Cleveland. He’s currently committed to Houston, but his interest in the Cougars is fading fast. Even with fellow four star receivers Josh Hammond and Freddie Swain already enrolled, the Gators have let Cleveland know that he’s got a place at UF- and he’s listening. He sees an opportunity to play right away and become a star, much like Antonio Callaway did last year. He’s also being pursued by Texas A&M, TCU and Arkansas, but Florida seems like the team to beat for him as well.

And if you’re wondering about the relationship between Fulton and Cleveland, hopefully this tweet from Fulton to Cleveland, featuring a photo of the two of them up in the Swamp’s press box, should describe it better than words can:

But while the Gators’ outlooks to land Fulton and Cleveland brightened over the weekend, they got some ominous signs from some of their other top targets.

FSU was also quite busy this weekend, hosting a similarly impressive cast of recruits. Among them were two defensive linemen the Gators are after, and could desperately use: defensive tackle Shavar Manuel and defensive end Brian Burns. Here comes the fun.

Manuel is currently committed to Florida, but as we’ve seen literally hundreds of times over the years, that means absolutely nothing. FSU players, coaches and commits made him feel very welcome, and all accounts are that he really enjoyed his visit. In addition, the fact that he was willing to take that visit to FSU despite being committed to Florida is concerning in the first place, as it indicates less than 100% certainty. And, well, him visiting FSU isn’t really likely to make him more certain that he wants to be a Gator.

Brian Burns is the one I’m really worried about. He visited Florida last weekend, and appeared to enjoy himself, which bolstered all the rumors and sources saying he was bound for Gainesville. But FSU showered him with even more attention than Manuel, including former Nole Darnell Dockett tweeting his opinion to him that he should come to Tallahassee. It feels like Burns is truly undecided on where he wants to go, but FSU getting his last visit was big for them.

Finally, there’s linebacker Mack Wilson, the master twitter troll. Last week, Wilson said that the Gators were his leader; days later, he announced on twitter that he was down to Georgia and Alabama… and then immediately deleted the tweet. This was after months of pretending to favor each of those three schools in alternating 48 hour intervals. So, who knows? I don’t think the odds of landing him are particularly good, but at this point he could sign to play soccer somewhere in Kyrgyzstan and it wouldn’t shock me. For the simple fact that nothing he says is to be trusted, it’s at least worth watching his announcement to find out for sure.

So this is pretty much where Florida stands as we come to the home stretch. I’ll give my official predictions tomorrow, but for the most part, these are the guys that are on the table for Florida to potentially close with. Realistically speaking, the Gators could sign up to four of the five aforementioned recruits (not Wilson) and if they do, they’d easily have one of the nation’s top five classes. Even if Florida just gets three of them (most likely Fulton, Cleveland and Manuel) and miss on the others (most likely Burns and Wilson), that would be a hell of a job by Jim McElwain in this recruiting cycle.

The Gators’ work on the recruiting trail is now done, as there’s a dead period that goes from now until Signing Day on Wednesday. The coaches have done all they can do. Now it’s time to sit back and watch the madness that is National Signing Day unfold.

One thought on “Recruiting: Gators look to close on top targets, finish with a top five class”