Gator Basketball Basketball Game Recaps Robinson leads Florida past ETSU, into Round of 32 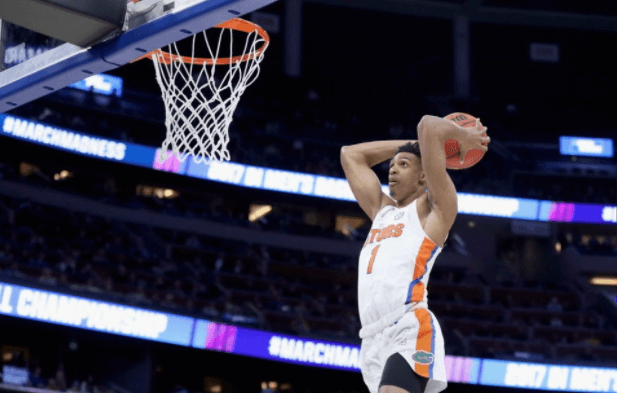 Given how quiet he’s been down the stretch, most teams probably didn’t have Devin Robinson too high on their scouting reports.

After his performance today against trendy upset pick East Tennessee State, you can bet he’ll be front and center on every scouting report the rest of the way.

Robinson scored 24 points and pulled down seven rebounds, Chris Chiozza and Kasey Hill added 14 apiece and the Gators overcame an early scoring drought and a substantial scare to pull away from ETSU, 80-65 in the first round of the NCAA Tournament. Up next for Florida awaits a gritty, defense first Virginia team that survived an even bigger scare against UNC Wilmington to advance, a rematch of a first round game five years ago.

Despite leading most of the way, the Gators could never really create much breathing room. Florida appeared poised to run away with it in the opening minutes, leading 14-6 thanks to some turnovers and dunks, but from there ETSU kept pace and began to slowly close the gap. The Buccaneers finally tied the game at 28 on a three from David Burrell with six minutes remaining in the first half, and then took their first lead nine seconds into the second half on a three from TJ Cromer. And Florida, the #4 seed in the East Region, seemed to be in big trouble.

That’s when Robinson, the junior with NBA written all over him, stepped up.

After a three from Justin Leon that gave the Gators the lead for keeps, Robinson buried back to back threes on consecutive possessions to put together a 9-0 run that sent the Buccaneers reeling. After ETSU finally remembered how to score (albeit from the free throw line), Kevaughn Allen joined the party and buried his own three- not a bad time for one of his just two made buckets on the day- to push the lead up to nine. Shortly thereafter, Chiozza drained two more three balls, the second of which made the score 62-47 with seven minutes to go. Dagger.

But Robinson was sure to let all the pundits who picked ETSU to upset Florida know they were wrong. Up 78-65 in the closing seconds, Robinson made his point with a thunderous jam that rocked the basket’s foundation. The dunk was probably not necessary given that he had broken free following a steal and was dribbling in the front court with the shot clock off, twenty seconds to go and not a defender within forty feet, but it sure made the orange clad Gator fans who made the short drive to Orlando happy.

And Florida fans needed to feel good, because there was plenty to be concerned about. Allen and Canyon Barry were a combined 2-15 from the field tonight, and that simply isn’t good enough if this team plans on beating Virginia. This was one of those nights where Florida’s depth bailed them out, and that’s because they have a good team without stars but several very talented players. That still isn’t to say that the closest two players to star caliber can be invisible and this team will beat the really good teams, though, so here’s hoping those two guys bounce back on Saturday.

The Gators also turned the ball over 15 times against the Bucs. Luckily, ETSU could only get six points out of them. Some of them were really bad, too: on one occasion Kasey Hill threw the ball four rows into the stands, and on another one Canyon Barry was wide open for a layup but simply dropped the pass and let it fall harmlessly out of bounds. Add that to the list of “this can’t happen if Florida wants to beat Virginia.”

Florida won, though, and that’s certainly better than the alternative. (Ask Minnesota.) The Gators also provided real cause for optimism with the way they shut down the Bucs’ potent offense. Other than Burrell and Cromer, nobody on ETSU scored in double figures. For perspective, this team typically plays eight or nine guys a game, and they averaged 80 points per game coming into the game- 19.1 a game of which come from Cromer. So, you do the math. And you can chalk ETSU up as yet another team the Gators held beneath their season scoring average.

So the Gators have to be licking their chops with a punchless Virginia offense on deck, knowing that they got a 15 point win despite getting virtually no production from their two best players. They also have to be aware that their margin for error offensively is smaller since they’ll have to earn every point they get. But while few teams employ the pack line defense Virginia does, that’s essentially true as a more general statement for the Gators. They’re five games away from a national championship now, three away from the Final Four and one away from Madison Square Garden. Every step they advance from here on out will only see the task get tougher.

And Florida wouldn’t have it any other way.

One thought on “Robinson leads Florida past ETSU, into Round of 32”