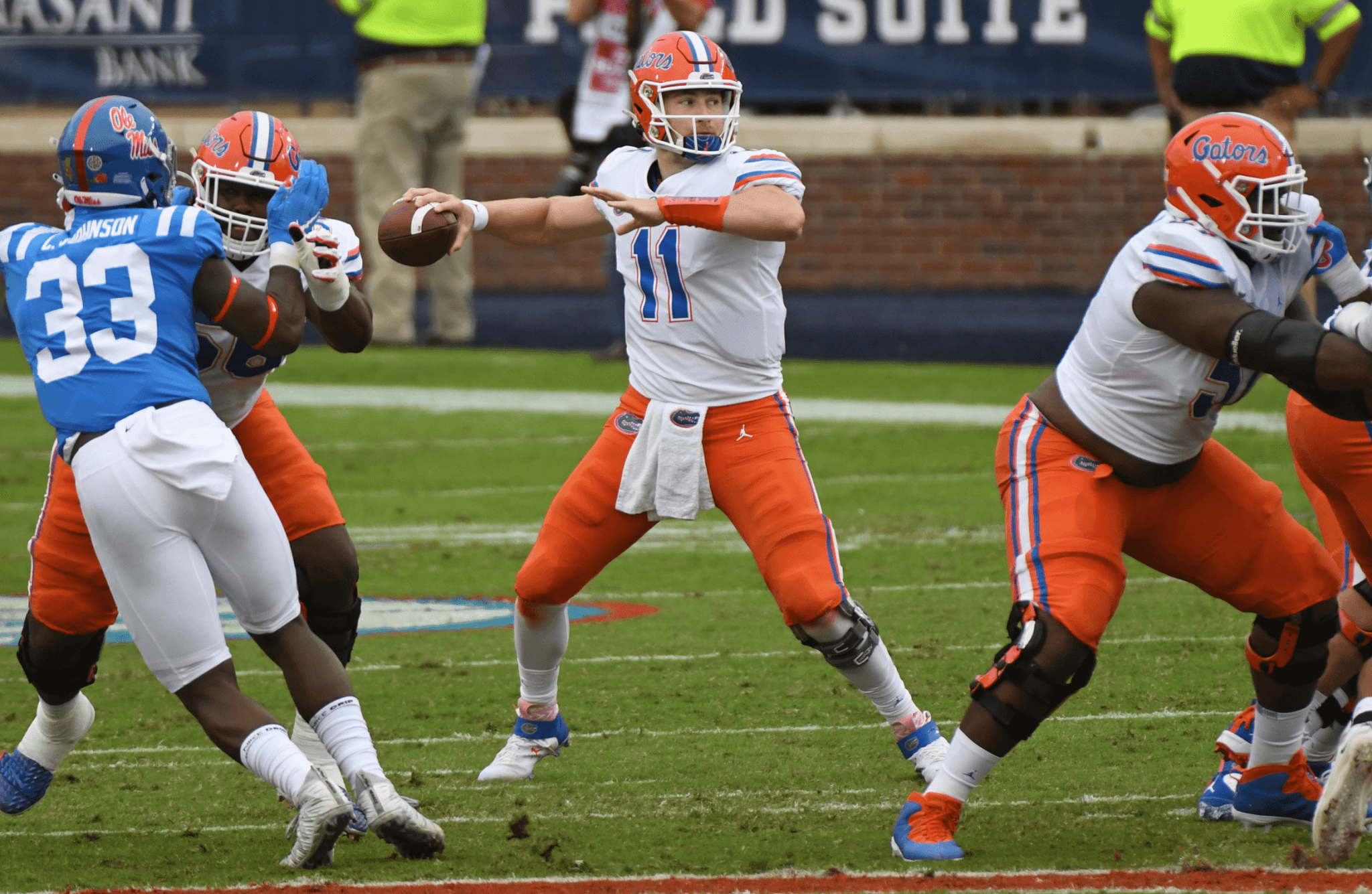 Dan Mullen returned to the place he once called “The School Up North” in his new set of colors for the first time. And he provided that school up north with a first class education in just how lethal his new offense is.

Kyle Trask went wild, completing 30 of his 42 passes for 416 yards and six touchdowns— both career highs— while tight end Kyle Pitts reeled in 170 of those yards and four of those touchdowns, as Florida outgunned Mississippi, 51-35, in Oxford. The win puts Florida at 1-0 for the third straight year, and ruined Lane Kiffin’s maiden voyage at Ole Miss to improve to 2-0 all time against the loud-mouthed twitter troll.

The win also evens up the all time head to head series against the Rebels at twelve wins apiece.

Prior to kickoff, the two teams banded together to collectively take a knee in protest of racial injustice in the United States. Once the players subsequently rose to their feet, though, bringing them back down proved to be difficult— on both sides.

Florida finished with 642 yards of total offense, which easily qualifies for the most in school history against a fellow SEC opponent. The Rebels also moved the ball at will, shredding the Florida defense for 613 yards of their own. But Ole Miss also failed to capitalize in some critical situations, which put them in an early hole.

The Rebels took the ball on the opening kickoff and promptly marched down the field deep into Gator territory. But Florida’s defense then stiffened and forced a fourth down, where Georgia transfer Brenton Cox blew through the line and sacked Matt Corral— a former Florida commit. Trask quickly made Ole Miss pay for that by directing a 13 play, 77 yard touchdown drive that he capped with an easy one yard toss to Trask to get the points party started.

Mississippi came right back with back to back deep strikes on the next drive, the latter of which was a 46 yard hookup from Corral to Dontario Drummond to tie the game at 7 before wasting another golden opportunity. Florida immediately turned the ball over on an ill-advised heave from Emory Jones that AJ Finley intercepted near midfield, and then Kiffin dialed up a double pass that resulted in Drummond hitting Jerrion Ealy for 45 yards. But then Cox got a hand on Corral’s pass and swatted it down— right into the hands of freshman Gervon Dexter, who alertly picked it out of the air to snuff the drive.

And Florida made Ole Miss pay for that immediately. The electric Kadarius Toney promptly broke off a 50 yard run, and on the very next play Trask hit Trevon Grimes for a 22 yard touchdown to retake the lead.

The Rebels would fight back to tie the game with another scoring strike from Corral to Drummond— but then the Lane Train started coming off the rails as the Gators ripped off 21 unanswered.

Florida took the lead for keeps when Trask lofted a 16 yard touchdown pass to Toney in the middle-back of the end zone. Ole Miss followed that up with a three and out, and Trask hit another 16 yard TD pass, this time to Pitts five seconds before halftime. The Gators got the ball to begin the second half, and Trask wasted no time landing another big blow, finding Pitts on the other end of a rainbow down the middle of the field for a 71 yard scoring strike. That made it 35-14, and dug the Rebels a deeper grave than they were equipped to dig out of.

Following the bomb to Pitts, Florida suddenly stopped tackling again and the Rebels slapped together a pair of quick touchdown drives. Meanwhile, the Gator offense began flaming out mid-drive and settling for field goals. Mississippi had sliced the lead down to 44-29 with ten minutes to go when Florida faced a third and eight deep in its own territory. Trask’s pass fell incomplete, but the Rebels’ Momo Sanogo was flagged for a questionable roughing the passer penalty. That gave Florida fifteen free yards, and more importantly, a free first down on a possession that was going nowhere.

Given new life on the drive and now smelling blood, Trask and Pitts teamed up once more to deliver the dagger. A few plays later, Trask lofted a ball up into the middle of the end zone for Pitts. The preseason All-American tight end navigated through two defenders and the back line to come down with the pass inbounds and adjust the score 51-29 with five minutes left.

To fans’ chagrin, the Gator defense elected to take a nap in those final five minutes. Florida allowed Ole Miss to drive 75 yards for one touchdown, recover an onside kick and then go flying right down the field again before narrowly being saved by the bell. The game ended with the ball inside the Florida ten, and Corral’s last-gasp heave for Jonathan Mingo falling incomplete as the clock struck triple zeroes.

But despite the defensive lapses, the Gators’ third straight season opening win figures to only ratchet up the already sky-high expectations for Mullen’s 2020 squad. Nine of Florida’s eleven drives on the day ended in points, with several different playmakers making their presences known. The offensive line, while not likely to produce a Rimington Award candidate, was competent. And though the defense got burned a lot, it did make a fair amount of big plays— without three of its key players.

Linebacker James Houston IV sat out with a hamstring injury and safety Brad Stewart did not play for an undisclosed reason. Safety Shawn Davis started, and was instantly ejected for a targeting foul. Houston and Davis will be back next week against South Carolina, while Stewart’s status remains TBD.

If Florida shores up its defense, which they have a history of doing under Mullen after subpar showings early on— and which getting at least two of their missing players should help them do— this team is going to be a frightening one for opponents to deal with. And though it’s way too early to accurately diagnose this, with ten percent of its regular season down and ninety to go, the Gators have nothing yet to disprove the theory that this should be their year to return to Atlanta.