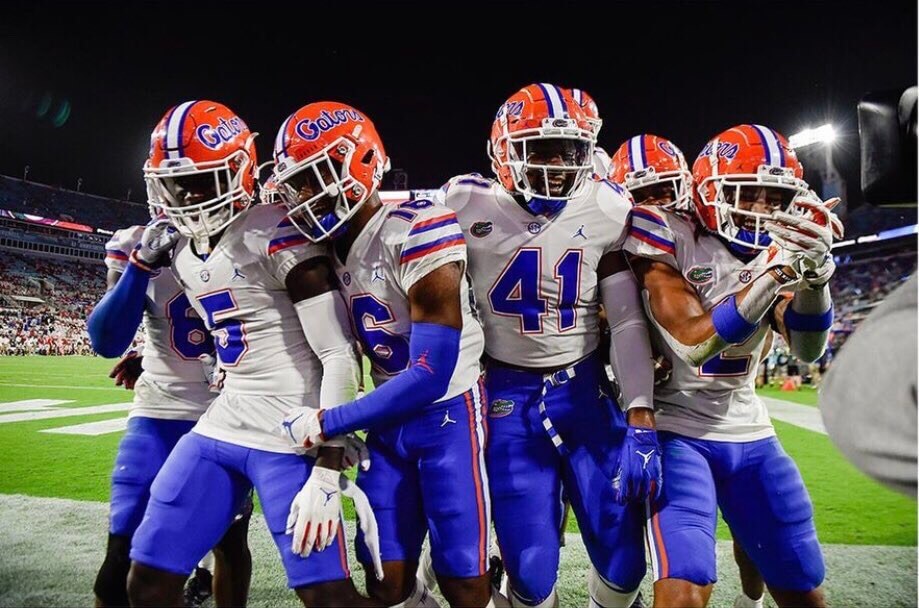 Throughout Dan Mullen’s short tenure at Florida, Kirby Smart has had Mullen’s number.  And three minutes into their third meeting in Jacksonville, it looked like that would continue.

But then Florida flipped the script and turned the game— and the rivalry— on its head. And this year, it was the Gators who raised the final toast at the World’s Largest Cocktail Party.

Kyle Trask threw for a career high 474 yards, Florida’s defense racked up a hat trick of interceptions and the Gators finally took control of the rivalry against Georgia with a commanding 44-28 win. It’s Mullen’s first win against the Bulldogs in five tries as a head coach, and Trask’s first win against a top five opponent in his collegiate career. And just like that, Trask finds himself in the thick of the Heisman race as the team he leads finds itself in the thick of the national championship hunt.

Given the way the game started, both of those things seemed like pipe dreams for Florida.

Georgia opened the game with a 75 yard lightning strike from Zamir White, who took the handoff from Stetson Bennett IV, found a crease off the left side and took it all the way. Florida promptly went nowhere and punted, and the Dawgs quickly struck again, this time requiring six plays to reach the end zone. With 11:44 left in the first quarter, Bennett IV punctured the Gator zone defense and found Marcus Rosemy-Jacksaint for the score to make it 14-0.

Unlike the last few meetings, though, Florida punched back. Trask found Keon Zipperer down the left sideline for a 39 yard pickoff, and then floated one over the middle to Justin Shorter on the crossing route for the score. After a three and out, Trask directed an 11 play, 80 yard drive that was highlighted by a 34 yard strike to Kyle Pitts and finished off by a two yard plunge from Dameon Pierce to knot the game at 14.

Georgia seemed to recalibrate itself on the next Gator drive thanks to a gift. Florida’s Xzavier Henderson ran the wrong route, drawing Eric Stokes too close to the area of Kadarius Toney and turning what would have been an easy completion into a pick six for Stokes.

But then Florida really began to flex its muscle. Trask tied the game with a 25 yard pass to Kyle Pitts on the second play of the ensuing drive— the first of which was a 50 yard connection to NayQuan Wright on the wheel route— and then put the Gators ahead for keeps by hitting two more wheel routes on the next drive. The first of these went to Malik Davis for 37 yards, before Georgia completely busted a coverage and let Kemore Gamble run free for a ridiculously easy 24 yard touchdown reception that put Florida ahead for keeps. Florida then tacked on a field goal and then an insurance touchdown toss from Trask to Trevon Grimes to give them a 38-21 lead at halftime… and all the cushion they would need.

Georgia had its chances to hang around with Florida as the scoring tapered off in the second half, but simply couldn’t capitalize.

Bennett missed Kierris Jackson right after with 7:40 to go in the first half for what should have been a touchdown. D’Wan Mathis replaced him, but missed several open receivers either by overthrowing them or just not seeing them. Together, the Bulldog quarterbacks threw three interceptions, the first of which (from Bennett IV) killed a possible scoring drive, as Kaiir Elam made a sliding grab of the errant ball at his own 34 yard line.

Even with all the wasted opportunities, the Bulldogs still had some life late. Down 41-28 with 8:05 to go, Georgia launched one more threat— but that effectively ended when Mathis overshot a wide open Demetrius Robinson for what would have been a touchdown. Florida then salted the game away by running a few minutes off the clock and then adding another field goal from Evan McPherson. Two interceptions and one victory formation later, and the party started.

Defensive coordinator Todd Grantham— much maligned after the Gator defense struggled in the first three games— got a Gatorade shower. Trask took a victory lap, wanting to soak up the victory as much as he could. Mullen, meanwhile, hopped up onto the ledge separating the stands from the field and celebrated with fans by taking selfies and exchanging high fives. And the players went wild in the locker room, dancing and singing with all the energy they had left.

“This was all part of the plan,” Trask told the media afterward. “We’re just getting started now.”

3 thoughts on “Gators kick Georgia out of Cocktail Party”